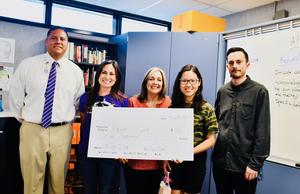 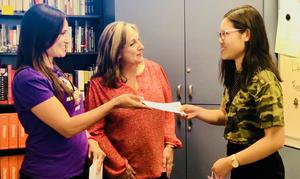 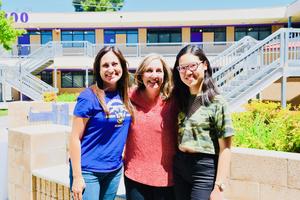 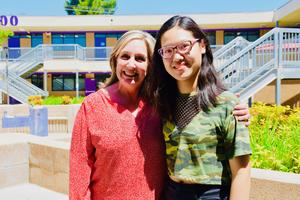 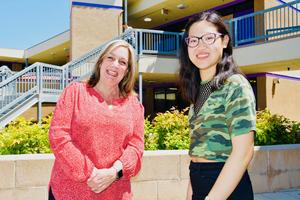 DIAMOND BAR, CA—Rachel Wang was quietly sitting in fourth period AP English Literature and Composition class at Diamond Bar High on Tuesday when her kindergarten teacher and school administrators popped in with a surprise announcement.

Rachel was named winner of a $500 scholarship sponsored by teacher Tanya Aparicio in memory of her personal hero, her father.

“I realized that they were talking about me and just started smiling!” the teen said.

For the competition, Rachel penned a two-page tribute about her own hero, former Maple Hill Elementary kindergarten teacher Lisa Esse.

“Mrs. Esse was really encouraging to every student in class,” said Rachel who shared that she was extremely shy and introverted when she entered school.

“She was like a beacon of light and showed me that school was not as intimidating as I thought,” the 17-year-old said.

With her teacher’s early encouragement, Rachel became interested in English and has even written a children’s book called Fighting Problems.

She will be heading to University of California, Irvine next year with hopes of becoming a teacher.

“It’s been a dream that has never faded,” she said.

“I would be so proud to have you follow in my footsteps,” said Esse, who currently teaches fourth grade at Quail Summit Elementary.

“This is so inspirational for me,” she added.

Aparicio decided to create the scholarship in honor of her father, Ernesto Aparicio, who passed away last year.

“His favorite saying was Feliz Dia which means happy day and was always seeking ways to be positive,” she said.

With that in mind, Aparicio decided to celebrate him by making an impact on the life of a college-bound student.

“It feels like this is full circle with Rachel honoring her very first teacher,” she said.

Hero Teacher! Diamond Bar High senior Rachel Wang named kindergarten teacher Lisa Esse her personal hero in an essay contest. On April 23, Esse and school administrators made a surprise class visit to announce that she was named the winner.