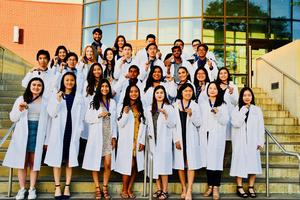 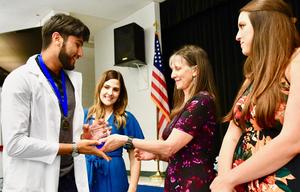 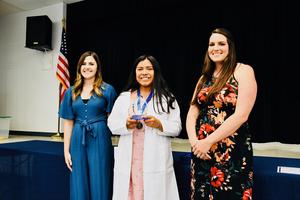 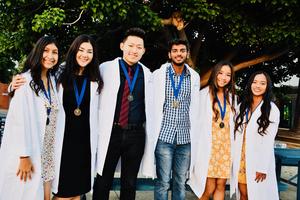 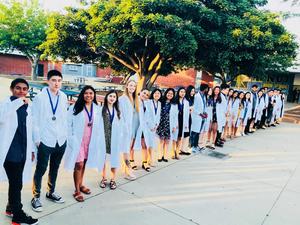 Walnut High launched the rigorous pathway in 2013, and is one of only five schools in California to offer both IBCP with the PLTW Biomedical Sciences program as its career-related component.

“I am really grateful that I chose this program and lucky our school provides it for us,” shared Jocelyn Sagahon-Ramirez before the White Coat Ceremony held April 23.

“I’ve always been interested in the medical field and this has really made an impact on me.”

Sagahon-Ramirez said she knew she was headed in the right direction during the very first PLTW course, Principals of Biomedical Sciences, she took as a sophomore.

“We followed the fictional character, Anna Garcia, who had died and researched several diseases like diabetes and Sickle cell anemia,” she said.

“I learned a lot and was even able to share information with a family member who has diabetes.”

This month, students in another class, PLTW Medical Interventions, unlocked a key to the molecular basis of genes by growing tiny dots of luminescent proteins.

“It was a whole process!” explained Chris Chang, 17, of the five-day experiment.

“We inserted the glowing gene from a jellyfish into bacteria and then purified the isolated cells by centrifuging the cultures,” he said.

On day two of the pGlo lab, students viewed their transformed glowing cells by placing the plastic petri dishes under a fluorescent light.

“The IBCP-PLTW program is really special because students get to experience these labs and hands-on projects,” Blanchard said.

“They are doing labs I didn’t even get to do in college!” she added.

The pGlo experiment demonstrates the real-world techniques used to manipulate genes to make human insulin and treat patients with diabetes.

“There’s a reason for everything we’re doing in these classes,” said Chang who plans to major in Biology and pursue a career as a surgeon.

“I feel accomplished and my parents are really proud of me!”

“These students have worked tremendously hard to successfully complete the courses in the Biomedical Science Pathway,” said Instructional Dean Barbie Cole during the presentation.