You’re on the Air! 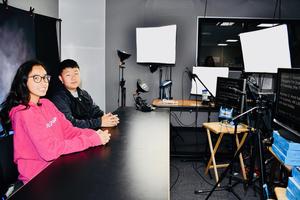 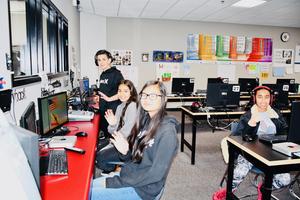 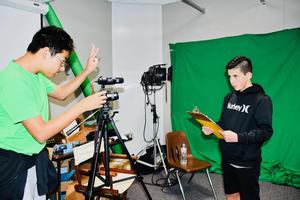 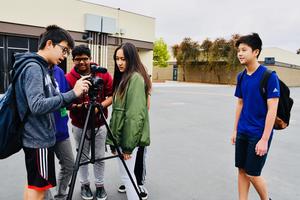 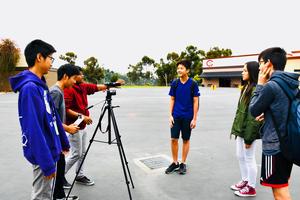 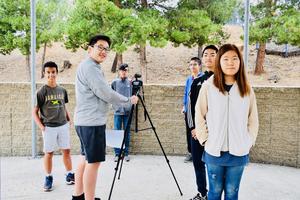 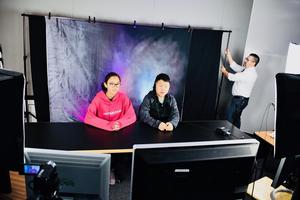 On Tuesday morning, groups of students were scattered “on location” in the outdoor quad taping their latest assignment, a soap opera.

“Our script is about a guy and girl dating - there’s a lot of breaking up,” says Steven Qi.

Students are responsible for every component of the technical and creative projects, that are also a vehicle to build collaboration skills.

“We wrote it, storyboarded it, rehearsed, and then went out to film,” explains Deija Mitchell, 14.

“We’ve got two main characters that are ogling over the same girl,” Cole Whitman explains while recording voiceovers inside the classroom.

He stands close to the camera delivering scripted lines for the audio piece.

“Then when we’re editing with Final Cut Pro, we just snap in the clip to get rid of all the background sounds,” Hu adds.

“It’s really fun being creative and working in our team,” comments Ardon Lee while securing his group’s digital camera on a tri-pod.

Teacher Scott York, who is completing his second year at Chaparral, leads the digital video production, broadcast, and Project Lead the Way classes.

He keeps classroom rules simple (no gum chewing, cell phones, talking, or empty desktops), but is adamant about two things: that students keep the equipment safe and show respect to each other.

With that in mind, he is constantly checking in with groups answering questions and making sure they are utilizing the equipment properly.

“And I’m always saying ‘good things’ to remind the kids to watch what comes out of their mouths,” he says.

During the Advocacy homeroom period, students are seamlessly preparing for the daily news broadcast.

In the studio, anchors Elace Ngo and Peter Park, both eighth graders, are poised behind the desk ready for their cue.

“Good Morning, Cougars! Today is May 6 and welcome to the Chaparral Cougar News Network,” Ngo recites following the teleprompter scroll.

CCNN is live-streamed into every classroom on campus by 9:30 a.m. most weekdays, following the morning greeting by Principal Ron Thibodeaux and flag salute.

The enclosed studio is set with an impressive cache of equipment including three cameras, stage lights, backdrop, input, and digitizer board.

The 14-member cast and crew, who auditioned for the class, are responsible for writing, producing, and creating edited videos for the live broadcast aired on YouTube.

“It’s not as nerve-wracking as being in front of actual students because I can pretend that nobody’s there,” said Ngo following the show.

“But I know that everybody on campus is seeing it!”

“If I make a mistake on air, I just go back and say it again,” Park said.

The CCNN staff members rotate through positions that include being on camera, and behind the scenes working the teleprompter, video, sound, director, switcher, and stream.

After months of production, everyone has discovered their favorite role on the show.

“I like sitting at the computer and monitoring the stream to make sure the audio is good,” says Whitman.

“I like being switch and sound,” adds Joyce Dimetry.

“The best part of this class is the people that I’m on air with – they’re always fun!”  Ngo said.

York is keen that along with learning technical production skills and the importance of meeting project deadlines, his charges become better working in groups and better communicators.

He believes students are gaining abilities they’ll use the rest of their lives.

“I was involved in a similar program when I was in middle school and know how much it helped me develop skills that I’m still using today.”

Chaparral CCNN co-hosts Elace Ngo and Peter Park ready to begin the live-streamed broadcast on May 6.

Behind the Scenes: Chaparral’s CCNN news crew members prepare to go on air.