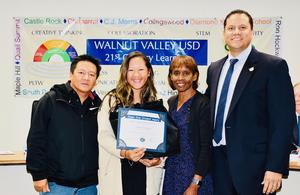 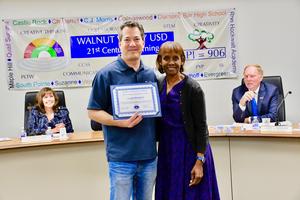 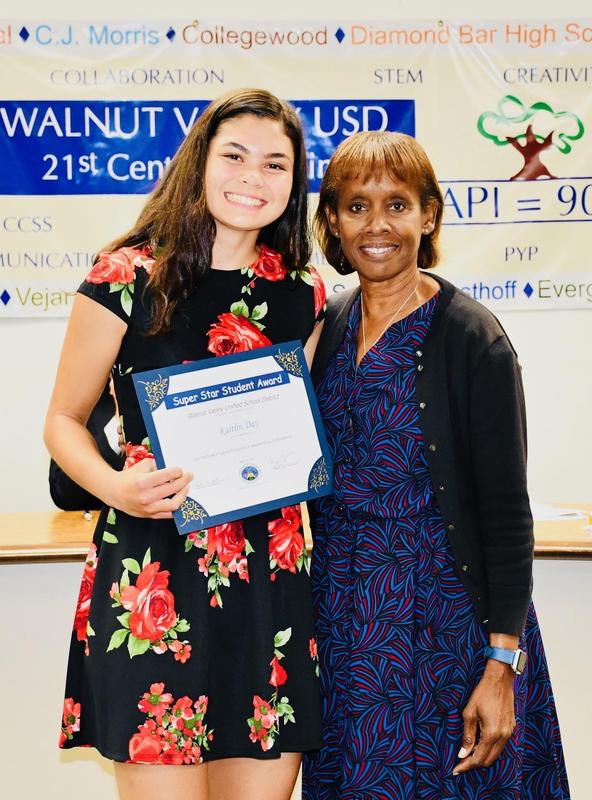 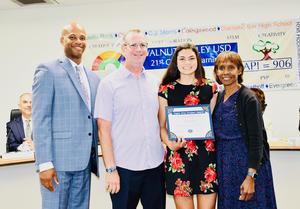 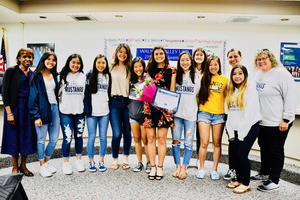 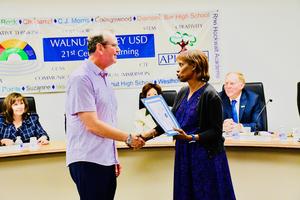 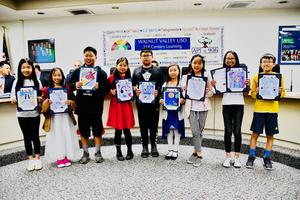 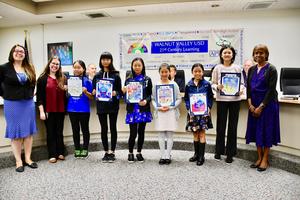 WALNUT, CA—The Walnut Valley USD Board of Trustees recognized exemplary students and community members from Diamond Bar and Walnut High Schools during the May 15 meeting. In addition, the Board honored 27 talented young artists named winners in the international Music K-8 Magazine Cover Contest.

Kailie also had the distinct honor of serving as the Girls Golf team’s captain for the past three years. She recently competed in the Canadian Women’s Amateur Golf Tournament and the U.S. Women’s Open Qualifier held in Chicago. She was in the lead after the first round and finished just one stroke away from competing in the prestigious tournament. Kailie will attend the University of Arizona to play golf next year.

Joe Bloomfield was lauded with the Partner in Education Award for his generous contributions at Diamond Bar High.He spent last three years developing a partnership with the school’s Career Technical Education (CTE) and Robotics programs. Joe has served as a mentor for the past two years, donating time to supervise students in the 3D Printing Club for at least five hours after school each week.

“His efforts have enabled the expansion of our Engineering, 3D Printing, Manufacturing, and Business Pathways for CTE,” said Principal Dr. Reuben Jones.

Walnut High senior Kaitlin Day was lauded with the Super Star Student Award for academic and athletic excellence. The National Merit Commended student earned the Girl Scout Gold Award and held the position of captain of the Varsity Basketball team. She has also been a member of the Varsity Track team for four years, served on Leadership for three years, is the current ASB President, and past ASB Secretary.

Kaitlin has spent numerous hours volunteering and leading peers through numerous activities on campus. Her compassion is evident by the way she mentors younger students and by her involvement with Best Buddies program. She is well respected by her peers, loved by staff, and described as being “honest, friendly, intelligent, compassionate, driven, and funny” by grade level coordinator, Jennifer Tucker.

“Kaitlin’s dedication to Walnut High will leave a lasting impact on all of us who have shared in watching and working with her!” said Principal Brandon Dade.

Parent volunteer Jeff Day was commended with the Partner in Education Award for his unmatched drive and commitment to the Girls Basketball program. For the past four years, Jeff has worked tirelessly with coaches, parents, and community members to enhance the experience of the team. Coach Lori Huckler described the dedicated volunteer as “an outstanding human being and a rock for the Girls Basketball program.”

“Jeff exemplifies the meaning of family, and he has brought tremendous love and energy to Walnut High,” said Principal Brandon Dade.

Board President Helen Hall presents Joe Bloomfield the Partner in Education Award for his generous contributions at Diamond Bar High.

Walnut High parent volunteer Jeff Day lauded with the Partner in Education Award during May 15 Board Meeting.