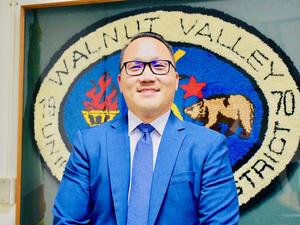 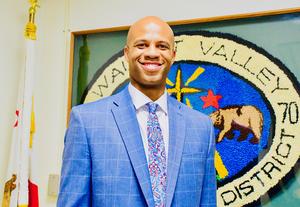 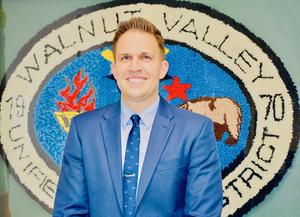 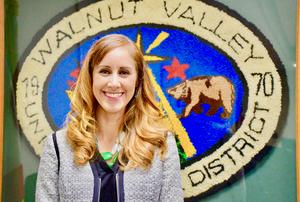 Veteran educator Dr. Danny Kim was appointed as administrative director of Human Resources. Dr. Kim has served as director of Pupil Services, Secondary Education for the past four years. With over 15 years in education, Dr. Kim brings a unique combination of experience to his new role.  He has provided exceptional oversight in numerous areas, has a wonderful leadership style, and is well-versed across the District. He previously was an instructional dean and teacher at his alma mater, Walnut High School, and secondary level principal in the Corona-Norco Unified School District (CNUSD). Dr. Kim holds bachelor of arts and master’s degrees from University of California, Irvine (UCI) and doctoral degree in Educational Leadership from the University of Southern California (USC). Dr. Kim also serves as an adjunct professor for the Masters of Arts in Teaching program at USC, and for the Division of Continuing Education program at UCI.  He and his wife Linda, a Walnut Elementary teacher and their four children reside in Chino Hills. He succeeds Dr. Sergio Canal who accepted the position of assistant superintendent of Human Resources in the Upland Unified School District.

“I’m super excited about the learning and leadership opportunities in the Human Resources Division!  It is a blessing to continue to serve our Walnut Valley community in this new capacity,” he said.

Brandon Dade brings nearly 20 years of administrative experience to his new position as director of Pupil Personnel Services, Secondary Education.  He joined the Walnut Valley team in 2015 as principal at Walnut High School.  Dade’s proven leadership and wealth of global experiences will contribute to the Pupil Services division. He previously served as middle school principal and assistant principal in CNUSD along with assistant principal and high school counselor in the Alhambra Unified School District. Prior to that he was a Los Angeles County social worker and is also fluent in American Sign Language. Dade received a bachelor’s degree in social work from University of Montana and master’s degree in school counseling from University of La Verne. He and his wife, Clara, have three children and reside in Ontario. Dade succeeds Dr. Danny Kim who was tapped to serve as administrative director of Human Resources. He begins his new duties on July 1.

“I’m very honored and blessed to have this opportunity to serve Walnut Valley students and families in this new role,” Dade said.

Ryan Maine is a familiar face in Walnut Valley who is returning to take the helm as principal at Walnut High School. He is a proven administrator that possesses the vision, passion, and integrity to successfully lead students and school community.

“It is a dream come true to come back to Walnut Valley,” Maine said after the June 19 Board Meeting.

“This district shaped me into the person I am today. I am excited to get to sit down and meet with the Walnut staff as well as get to know the students. The goal will remain the same at Walnut High School, which is to offer THE best educational experience for our staff, students, and community.”

A Brahma alumnus and star athlete, Maine graduated from Diamond Bar High, attended Chaparral Middle School, and Castle Rock Elementary. He went on to teach Social Studies and Video Production at his alma mater for seven years where he earned the 2007 Rookie Teacher of the Year title, launched the school’s first weekly “Stampede” news broadcast, created an annual Film Festival, and advised the Fellowship of Christian Athletes Club. As head varsity football coach for three years, Maine successfully led the team to their first playoff berth in a decade. He coordinated the C.H.A.M.P. (Creating Honorable and Aspiring Mentors with Purpose) program which was a cross-age mentoring program with his players and Castle Rock students and created the Secret Santa program to benefit fourth-grade students in Downtown Los Angeles.

For the past five years, Maine served as assistant principal, teacher, and coach at Santiago High School in CNUSD. He developed a culture of communication through a weekly newsletter and innovative “The Bite” news broadcast highlighting arts, athletics, activities, and academies. The tech-savvy administrator live-streamed school activities and maintained the school website, while overseeing a variety of programs such as Math, CTE, Visual & Performing Arts, Dual Enrollment, Educational Technology, and school safety.

Maine earned a bachelor’s degree from University of San Diego, master’s degree from Grand Canyon University, and will complete his doctorate in Educational Leadership at Azusa Pacific University in June 2020. He and his wife, Lindsay, have twin four-year-old’s and are expecting their third child this month. Maine succeeds Brandon Dade who was promoted to Director of Pupil Personnel Services. He will officially begin duties on the 2,600-student campus on July 1.

Veteran educator Denise Loera will return to Chaparral Middle School as assistant principal in July bringing over 20 years of experience to her new post. Last year, she was promoted to instructional dean at Diamond Bar High School and previously served 11 years as a mathematics teacher, department chair, Induction Mentor, and technology coach at Chaparral. Prior to that, she was a math teacher in MUSD at Eastmont Intermediate School and Schurr High School in Montebello. She holds a bachelor’s degree in mathematics from California State University, Los Angeles and master’s degree from University of California, Los Angeles. Loera is married with three children, two that attend Walnut High School and one attending Evergreen Elementary School.

“I am truly grateful for the opportunity to have served an amazing community at DBHS, and I’m looking forward to working with the Chaparral team in a new capacity,” Loera commented.