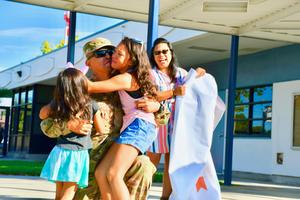 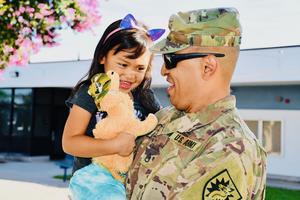 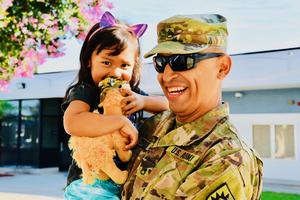 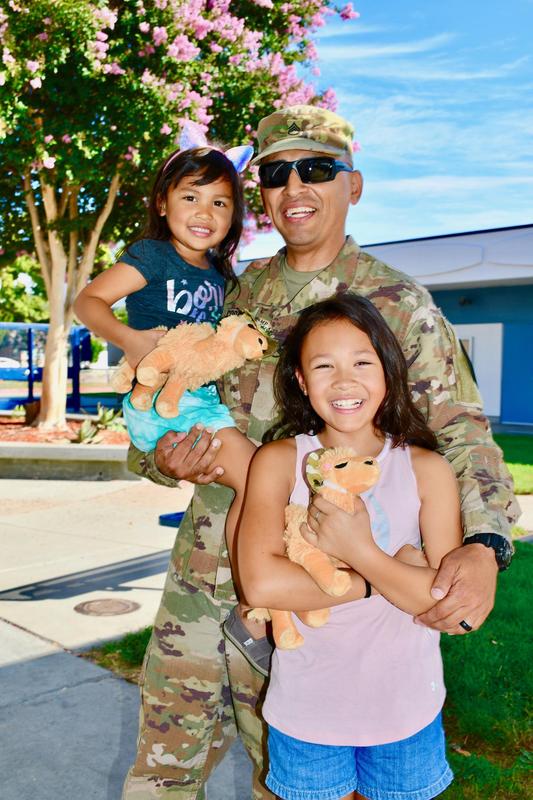 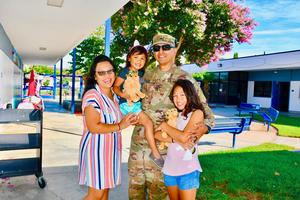 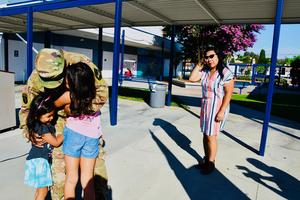 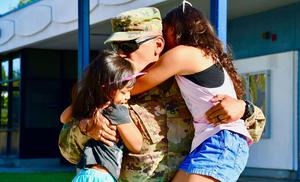 WALNUT, CA—Giselle Cordova, a second-grade teacher at Vejar Elementary School, pulled off the surprise of a lifetime this morning for daughters Abigail and Hannah.

Their father, Staff Sergeant Julio Cordova of the 251 Finance Unit, returned home on Friday after nine months of deployment in Afghanistan.

But, the clever parents kept the big news under wraps until it was revealed during a schoolwide assembly.

“I knew from the day he left that we would plan a surprise homecoming for the girls,” Giselle said.

Abigail (Abby) had watched videos throughout the deployment and kept saying that she wanted to be surprised too,” he mother shared.

But, the couple only knew he would be returning sometime in August or September, and didn’t receive official word until last week.

“He called on Thursday and said, ‘I’ll be home tomorrow at 10 a.m.’” Giselle recalled of her husband’s first deployment after 14 years of service with the Army Reserve.

“We kept it a secret all weekend and the entire staff helped!” Giselle said of the covert maneuver.

“I told them that I was at a retreat!”

“We even had a new banner made to help students to remember the values of respect, responsibility, and safety,” Prenger said.

What the children didn’t know was that Giselle and Julio were hiding behind the banner as they approached the amphitheater stage.

Prenger finally revealed the true purpose of the assembly as she welcomed home the military dad.

Both girls immediately bolted to the stage and jumped into their father’s arms as the audience cheered.

He presented them with cuddly stuffed camels with camouflage hats that matched his uniform.

Hannah, a kindergartner, squeezed her dad’s neck as she quietly looked into his eyes streaming with tears.

“I saw Mommy’s dress and then Daddy’s boots under the banner and said, oh my gosh!” the stunned fifth grader Abby reported moments later.

“I just started running and thought I was going to faint!” she said wearing a huge smile.

Surprise Welcome Home! Vejar Elementary sisters Abby and Hannah Cordova were surprised by their dad, Staff Sergeant Julio Cordova’s return from Afghanistan during an assembly on August 26. Shown with mom Giselle, a second-grade teacher at the school.