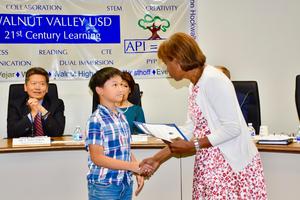 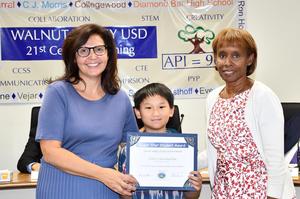 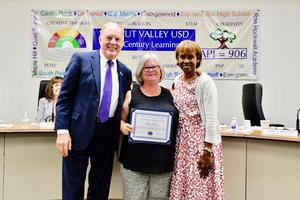 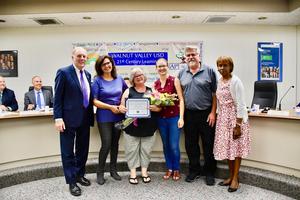 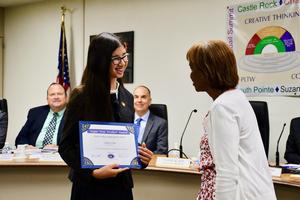 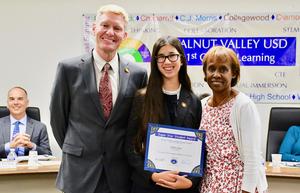 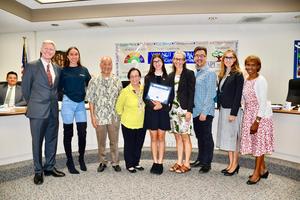 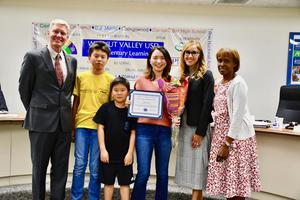 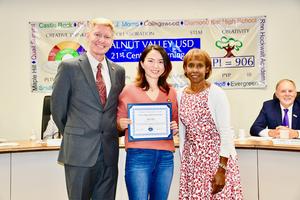 In the classroom, Arthy works hard, is always kind and respectful, and helpful to classmates.

“Arthy exemplifies what it means to have a growth mindset,” said Principal Frances Weissenberger. “We are very proud of Arthy as a mathematician and as a person!”

Artist (and former parent) Margot Bloom was honored with the Partner in Education Award for the beautiful mural spaces she has created on campus.

Down the hall, a stunning 15-foot-long tree mural is decorated with handprint leaves from every student and staff member on campus.

Most recently, she designed the artwork for an outdoor kindness rock garden and buddy bench.

When Margot is working on campus, she is usually surrounded by students while describing what she is doing.

“I know this slows her progress, but you can tell she loves talking with the students and hopefully instilling a love of creativity in them,” Weissenberger said.

“Margot has brought beauty to our campus and for that we will always be grateful!”

Chaparral 8th grader Aslin Choi was acknowledged with the Super Star Student Award for exemplifying academic excellence with a 4.0 GPA for the past two years, including 21 of 24 A+ scores.

She has also been involved in a wide variety of activities, including ASB, choir, yearbook, and was cast in the lead role in the spring musical.

Last summer, Aslin interviewed and was accepted to the UC Irvine Tech Trek Team where she participated in five days of STEM/STEAM activities on the college campus.

“We are so proud of this year’s Chaparral standout student – she’s awesome!” said Principal Ron Thibodeaux.

“We are fortunate to have her on campus and celebrate her as our parent partner!” Thibodeaux added.