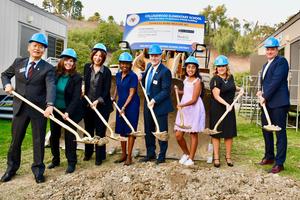 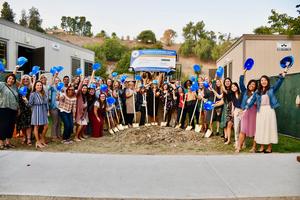 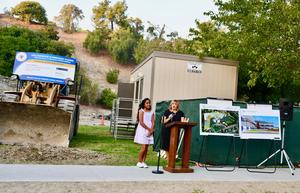 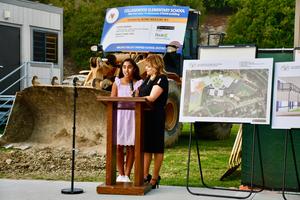 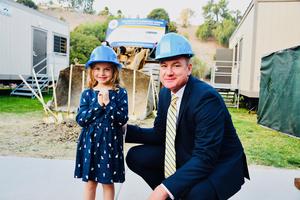 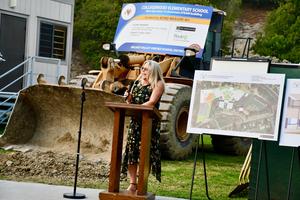 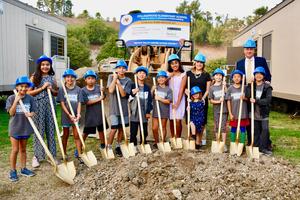 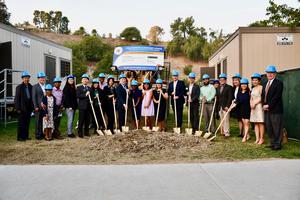 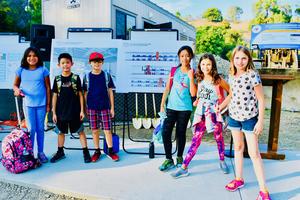 WALNUT, CA—Flanked by golden shovels, a pair of construction trailers, and a towering 100-ton bulldozer, Walnut Valley USD celebrated the groundbreaking of a two-story, 14-classroom building at Collegewood Elementary on November 6.

Educators, students, parents, community members, and local officials gathered to commemorate the new 21stcentury educational center to be constructed at the northwest end of the Walnut campus.

“Our community is not just gifting us with a building, they are giving us a space to come together and change the way kids learn,” said Principal Dr. Mary Wendland.

The nearly $10-million transformational project, made possible by voter approval of Bond Measure WV, will lay the framework for STEAM (Science, Technology, Engineering, Arts, and Mathematics) education at the school.

“I can hardly wait to invite students into this state-of-the-art learning space where their thinking will be challenged and friendships will be fostered,” Wendland added.

“I’m excited that Collegewood will be getting this new beautiful facility that is so well deserved!” shared Superintendent Dr. Robert Taylor.

The schools chief said that he is often reminded by community members of their connections to the school that first opened its doors more than a half century ago - even comparing to the popular Six Degrees of Kevin Bacon.

“That’s Collegewood to me - there are so many people that this school has impacted!” he added.

The long-awaited construction project will also include a new playground, amphitheater, exterior covered canopy, and removal of 14 outdated portable classrooms.

“Thank you to our entire Walnut Valley community for making this new addition to Collegewood a reality,” said Board President Helen Hall.

Construction will take part in two phases and is slated for completion in July 2021.

Principal Wendland said students had been “captivated” as construction crews began digging on the campus earlier in the week.

“All the kids are excited for the changes coming to our school,” said fifth grader Westley Matavo.

“It will be like watching a giant Lego structure being built by professionals!”

“This is a dream come true!” shared retired educator Jane Dyer-Smith of her milestone Collegewood memories that began as a student in 1965 and being hired to teach at her alma mater 15 years later.

“I’ve been a Collegewood Cougar for most of my life and have seen and experienced many changes here, but the one thing that will never change is your love for teaching and dedication to students, parents, and the community.”