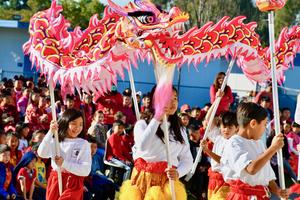 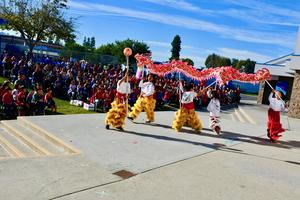 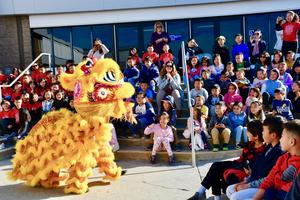 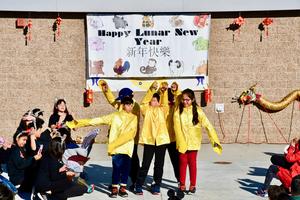 Year of the Rat!

The kindergarten through fifth grade children are part of the school’s Dual Language Immersion (DLI) program that offers unique and innovative instruction in both English and Mandarin.

Each grade level took a turn on stage to perform for schoolmates, with the program culminating in traditional dragon and lion dances.

Kindergartners ushered in the new year by being brave and trying new things, like dancing in front of the crowd during “Xin Nian Hao” and “Better When I’m Dancing.”

First graders danced to “Give You a Big Sticky Rice Cake” and second graders welcomed the new year with a dance and chant wishing great health, prosperity, and luck.

Third grade performed a legend about the ribbon dance that originated from the People in the Han Dynasty.

Fourth graders presented a Chinese folktale about a monster named Nian and how the color red plays an important role during the Lunar New Year.

Fifth graders performed a skit written and choreographed by a group of talented students about a mouse and cat who never got along with each other. They faced different types of obstacles and discover that they need to work with one another to overcome the challenge.

They are coached by Justin Wong Benvavidez and Matt Chung from the San Gabriel Valley Chinese Cultural Association.

During the past nine years, the DLI program at Walnut Elementary has grown to over 350 students, and in 2017 expanded to South Pointe Middle School serving about 100 sixth, seventh, and eighth graders.

Students participate in a 50-50 program, where half the day is spent learning in a Mandarin speaking environment.

“The children soak up the new language like little sponges,” said first grade teacher Henry Lin who sees tremendous growth of the young learners each year.

“When the older students were performing this morning, I could see how much they’ve learned since they were in my class!” he commented.

The ultimate goal for the dual language immersion plan is to help develop bilingualism, biliteracy, and an enhanced awareness of cultural diversity.

The Dual Language Immersion program is available for elementary and middle school students in the Walnut Valley Unified School District. Applications and information are available at www.wvusd.k12.ca.us.