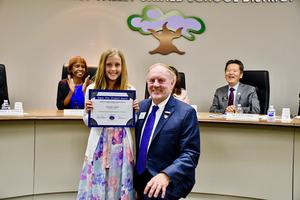 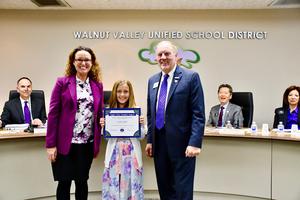 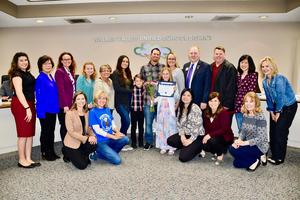 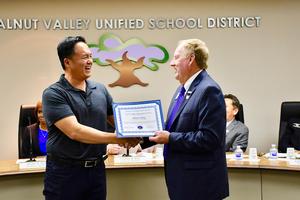 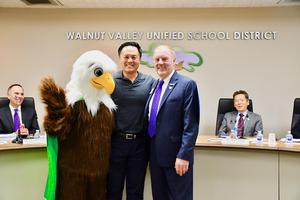 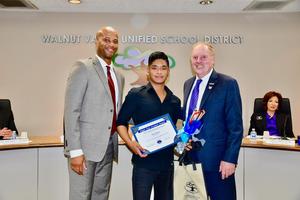 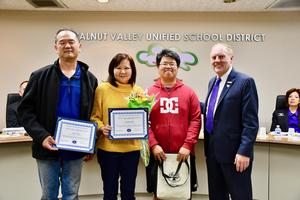 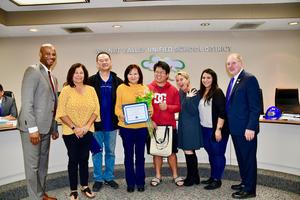 WALNUT, CA—In keeping with tradition, Walnut Valley USD Board of Trustees celebrated outstanding students and parents during the February 19 meeting.

Evergreen Elementary fifth grader Kayden Siglar received the Super Star Student Award. Kayden shines at school while being kind, helpful, and determined to support classmates achieve success. She is thoughtful and patient, quick to share a smile, and treats everyone with compassion – even those that might not be easy to get along with.  Kayden is also a stellar student who teachers describe as being organized, responsible and conscientious.

“What stands out to me most about Kayden is her resilience,” said Principal Trina Dreyer. “She perseveres and makes the most out of difficult situations. Evergreen is so proud of Kaden!”

Parent volunteer Robert Chang was honored with the Partner in Education Award. For the past several years, Robert has volunteered countless hours coordinating Evergreen’s famous talent show, known as “Evergreen’s Got Talent”. He takes charge of this extraordinary event where students apply, audition, and perform on stage, and a backstage crew runs lights, sound, film, and emcees the production.

“Mr. Chang takes this experience to a whole different level. All of his hard work provides our students with unique leadership experiences, and they make the show run smoothly,” Dreyer lauded.

“We are grateful for all those moments he danced with children, was in pictures, let children poke and hug him all while he was disguised as our beloved Sparky.  Mr. Chang, Evergreen is grateful for you!” Dreyer added.

“Resiliency, grit, character, and insightfulness are words John lives out.  He not only beats the odds, but desires to change the odds,” described Director Brandon Dade.

At RHA, John was able to see the power in serving others.  He learned the value of taking the time to really know someone and the importance of connections.   He created powerful chalk art messages to encourage fellow students and created RHA’s first club where teens gathered support each other in living healthy lifestyles.  In the classroom, John consistently set goals for himself and not only reached them, but exceeded them.

“John is relentless and has chosen to live out the true meaning of HOPE at RHA.  John has heart, is optimistic, has persevered, and strives to do all with excellence,” Dade said.

Teresa Sam and Sean Tsai were acknowledged with Partners in Education Awards. This year, two Ron Hockwalt Academies students had a vision to build a pond in the school’s HOPE garden.  Seniors Andrew Rodriguez and Jordan Sam wanted to leave a legacy at the campus that teaches HOPE (Heart, Optimism, Perseverance, Excellence) and gives second changes to all students. Jordan’s parents, Sean and Teresa, generously provided the water spillway, water pump, and lining for the project.

“Students are learning to thrive and grown into amazing individuals,” Andrew wrote in a letter seeking support for the pond endeavor. “They are working through life struggles and are fighting to try to change the odds while learning to live to their fullest potential. Building this pond will allow students to feel more relaxed and at ease allowing them to perform better in their school work. By giving students this opportunity, it will allow not only to be more academically successful, but giving us the option of being more productive in our community. RHA is a very small school with not many of the resources for the pond, but students are very motivated to make it happen”

Both teens worked numerous days and hours designing plans, digging, and recruiting others to partner in the project.

“We want to thank Jordan’s family for this donation, it has brought a lot of smiles on our campus!” Dade said.