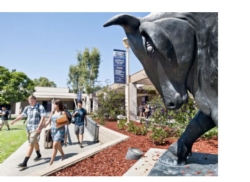 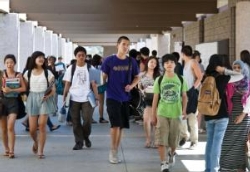 San Gabriel Valley Tribune
August 25, 2011
Exit exam results show small gains
Justin Velasco, Staff Writer
The results of this year's batch of California high school exit exams are in, and first-time test takers showed small gains over last year.
The exit exam, or CAHSEE, is first given to students during their sophomore year of high school. Those who don't pass it the first time can take the test up to seven more times before graduation.
Statewide, 82 percent of sophomores who took the test for the first time this year passed the English language arts portion, up one percent compared to last year. The number of students passing the math portion rose two points, bringing the passing percentage to 83 percent.
Tom Torlakson, state superintendent of public instruction, heralded the results.
"It is heartening to see that our students continue to learn and achieve despite the painful toll that budget cuts are taking on our schools," Torlakson said in a prepared statement.
In Los Angeles County, a slightly smaller percentage of students passed the test - 81 percent in both English and math - but students also improved more this year. Compared with last year, the percent of students passing each portion rose 3 percent.
As is usually the case with standardized tests, San Gabriel Valley school districts showed a wide range of results.
Walnut Valley Unified had the highest success rate, with 95 percent of sophomores passing the English portion and 97 percent passing in math.
Within Walnut Valley, Diamond Bar High School scored even higher, with 97 percent of it sophomores passing the English portion and 99 percent passing the math portion.
Principal Catherine Real wasn't surprised.
"Actually that's pretty typical for us," she said. "We have really great students here. We're kind of used it."
Real attributed the high success rate to motivated students, parents and teachers, as well as a practice exam offered to ninth graders that lets them "get their feet wet."
But the data also show that districts and schools with high passing rates also tended to improve little this year.
In Walnut Valley, the percentage of students passing the English portion remained exactly the same, and the math percentage fell by 1 percent.
This trend proved true in Glendora Unified, which dropped 1 percent in English and rose two points math; and Bonita Unified, which stayed the same in English and rose one point in math.
Real said there's no reason there can't continue to be improvement, even with a 99 percent success rate.
"As far as math is concerned, there is 1 percent left," she said. "We're addressing that through the English learners group. We have a special CAHSEE prep class for English learners."
Conversely, some of the districts with the lowest success rates showed some of the biggest increases.
Baldwin Park Unified, where nearly three in 10 sophomores failed the math portion last year, saw a 10-percent increase this year.
Noreen Iwai-Ito, director of support services, and Cynthia Cuevas, assistant superintendent of human resources, said the district was able to make improvements by analyzing data about its students and targeting "weaknesses and needs."
"We focused on math, specifically algebra," Cuevas said. "We're really proud this year that we saw such a jump."
Similarly, Bassett Unified saw an 8-percent rise in the success rate on the math portion, with 85 percent of students passing it this year.
Bassett Unified Superintendent Marty Galindo said his district's improvements were a collective effort of Bassett High School's principal, the English Department and the board of education.
"When you get people that work together that's just what happens," Galindo said. "It provides a focus when you have that emphasis on helping students."
Perhaps the biggest challenge for school districts will be bringing up success rates for students who speak English as a second language. At the state level, only 44 percent of them passed the exam on their first try. In Bassett, that number was higher - about 60 percent - but not high enough, Galindo said.
"That's not acceptable," he said. "We still have to focus on English language learners."
View story at www.sgvtribune.com
Shown:
Students leave classes at the end of the day at Diamond Bar High on Wednesday. California released high school exit exam scores today.  At Diamond Bar High School, 96 percent of 10th-graders passed the English portion and 99 percent passed the math portion. (Watchara Phomicinda Staff Photographer)
Diamond Bar students pass Exit Exam with flying colors.