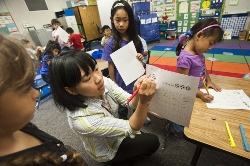 San Gabriel Valley Tribune
September 11, 2011
Inland Valley Daily Bulletin
September 11, 2011
Richard Irwin, Staff Writer
Walnut Valley district starting teaching Mandarin to kindergartners
The federal government wants kindergartners to learn Mandarin and has given Walnut Valley Unified a $1.2 million Foreign Language Assistance Program grant.
"The government saw a need for more language instruction, especially in critical languages such as Arabic, Chinese, Russian, Japanese and Korean," Walnut program specialist Jenny Kwan-Hata said.
"So it decided to give school districts money to develop new language programs."
Walnut Valley, which serves part of Diamond Bar and Walnut, calls its new program "Global Connections - Creating 21st Century Biliterate/Bicultural Children." The program's goal is to make students fluent in both English and Mandarin by the end of the fifth-grade.
"When I learned we were getting the new program I was thrilled. Now we will have four kindergarten classes at Walnut Elementary," Principal Janet Green said.
The district is beginning with 48 kids from Walnut and Diamond Bar. The two classes will spend half the day learning in English and the other half studying in Mandarin.
"About half the students already know Mandarin," Kwan-Hata noted. "But they still have to learn to read and write Mandarin to become truly fluent in it."
When little Jasmine Buenafe was asked if she was Chinese, the 5-year-old vigorously shook her head no, proclaiming "I'm American. Chinese-American."
While many of the kindergartners were of Chinese descent, there were many other races and cultures represented.
One tyke was working on his third language.
"I already speak Russian and English," 5-year-old Michael Wight boasted. "Now I want to learn Mandarin."
Kwan-Hata said the youngsters pick up new languages quickly. Some like Maverick Nestr easily converse in both languages.
"Maverick plays T-ball and one day he was chatting with teammates in Mandarin," the program specialist said. "One of the parents later came up to him to compliment him on his Mandarin."
Others like Natalie Wang, Jayden Su and Celine Kwai say they already know a lot of Mandarin. Like every other 5-year-old, they just enjoy talking to each other, whatever the language.
Their teacher Amy Wu holds teaching certificates in both elementary education and Mandarin. The UC Irvine graduate teaches the Mandarin portion of the day.
"When I heard about the dual language program I applied right away," Wu said. "I had been substituting in the district while I looked for a full-time position."
Mandarin posters decorate the kindergarten class, while the library boasts many children's books in the language spoken by more than a billion people.
"We were recently visited by teachers from Shanghai and one of the elementary teachers said she has the same books in her classroom," Wu said.
The Walnut students will also study the culture of China. They'll celebrate Chinese moon festival as well as the all-important Chinese New Year.

Photo:
Amy Wu teaches her kindergarten students how to write Chinese during class at Walnut Elementary School in Walnut on Tuesday, Aug. 30, 2011. Walnut Valley has a new dual language program in kindergarten. Students study in Chinese and English, integrating art, music and both languages. A $1.2 million federal grant will make the students literate in both Mandarin and English by the end of fifth grade. (SGVN/Staff photo by Watchara Phomicinda