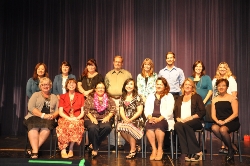 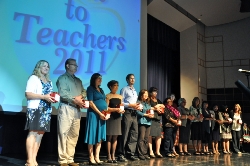 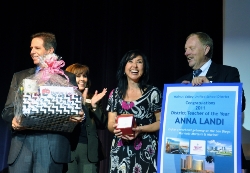 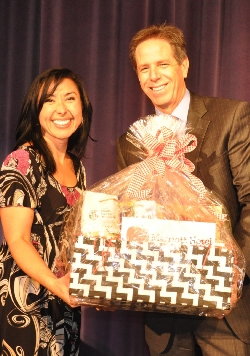 Contact:
Kelli Gile, Office of Community Resources
kgile@walnutvalley.k12.ca.us
(909) 595-1261 ext. 31204
Walnut Valley Salutes Teachers of the Year
WALNUT, CA--The Walnut Valley Unified School District recognized the 2010-2011 Teachers of the Year during the Salute to Teachers program held October 19.
The fifteen outstanding educators were selected by their peers for putting “Kids First” each and every day.
Congratulations to the following 2010-2011 Teachers of the Year:  Lori Stokes - Castle Rock Elementary, Anna Landi -Chaparral Middle School, Diva Arellanez - C.J. Morris Elementary, Betsy Hale - Collegewood Elementary, Deborah Clifford - Diamond Bar High, Sandy Moritz – Evergreen Elementary, Sue Conrad-Kanstul - Maple Hill Elementary, Norma Morales - Quail Summit Elementary, Nicole Sevilla – Ron Hockalt Acadmies, Shelly Yamashiro - South Pointe Middle School, Jonathan St. Amant - Suzanne Middle School, Kay Hoard - Vejar Elementary, Erin Ortiz - Walnut Elementary, Bill Bosanko - Walnut High and  Janet Murray - Westhoff Elementary.
The Teachers of the Year were honored with special tributes, music, and awards during the event held at the Walnut High School Performing Arts Center. This year’s ceremony was hosted by Dr. Kathy Granger, assistant superintendent of human resources and Robert Chang, director of human resources. The 40-member WHS Rhapsody in Blue girls’ ensemble performed under the direction of Lisa Lopez. The program culminated with recognition of Anna Landi as the District Teacher of the Year.
Superintendent Dr. Dean Conklin congratulated the honorees for their dedication to the children in Walnut Valley.  He said making sure students work hard on testing isn’t their most important job.
“I think the most important thing that you do as teachers is develop relationships with our kids and you get them ready to be citizens that contribute when they leave our schools.
When our students come to school, they see you and they walk into an environment that is warm and caring and nurturing, because that is a value that you have as well as a value I have, he said.
Dr. Conklin also referred to the African Maasai tribe who has always placed a high value on the children’s well being. Their traditional greeting “Casserian Engeri“ that translates to “and how are the children?” and the answer always is “the children are well”. The Maasai passed down values about their kids because they knew it meant the tribe is well, life is good, and we’re all going to be fine, he explained.
“Today we honor teachers; fifteen have been selected to represent over 600 outstanding teachers in our District. So, how are the children in Walnut? Thanks to the individuals being honored today, and all of you, I can say without hesitation - the children in Walnut are well!” Conklin said.
Each Teacher of the Year received a personalized crystal apple award courtesy of the Walnut Valley Educational Foundation; a Chick-Fil-A meal every month for a year, certificates to Golden Spoon, Robeks, Coldstone, Basically Books, and In-N-Out Burger; The Last Lecture by Randy Pausch; $50 WVUSD Warehouse classroom supply certificate; Rolling cart with office & class supplies; $25 MasterCard and supply of paper (Chaffey Credit Union); $50 Visa gift card (Schools First Federal Credit Union). Each Teacher of the Year also received certificates of achievement from U.S. Congressman Gary Miller, Senator Bob Huff, Assemblyman Curt Hagman, City Council of Diamond Bar, and City Council of City of Walnut.
The 2011 District Teacher of the Year Social studies teacher Anna Landi thanked her colleagues for being her inspiration during her career as an educator. She is in her fifth year at Chaparral and 11th in the District.
“You inspire me through your daily actions of dedication of empathy and passion your for teaching. I look around me at work and all I want to do is be just like you,” she said.
Her goal is to be there, to encourage, to support, and to validate each student that comes into her class.
“So each student knows they are valued, they are powerful, and they can have a powerful impact on others in the world. I believe those are the lessons that really matter,” she said.
Landi said that education has always been important in her life and credited her family for the examples they provided.
‘This amazing award I graciously accept in honor of my mother Olivia and grandmother Tomiko,” she said recognizing them in the audience.
Landi was presented with a golden apple award, numerous gifts from local business, and a weekend getaway at the Marriott Marquis & Marina in San Diego.
A special thanks to this year’s event sponsors:  Walnut Valley Educational Foundation, Marriott Marquis & Marina San Diego, LifeTouch Photography, Schools First Federal Credit Union, Chick-Fil-A – Walnut owners Bob & Michelle Sun, Staples, Robeks Juice, Golden Spoon, Akasaka Japanese Cuisine, Complete Business Systems, Applebee’s, Bella Napoli, P-line, Chaffey Credit Union, In-N-Out, Southwest School and Office Supply, Coldstone Creamery, Starbucks Coffee, El Pollo Loco, Millie’s Bakery & Restaurant, Diamond Bar Friends of the Library, and Roule Construction.
Photos:
District Teacher of the Year Anna Landi and Superintendent Dr. Dean Conklin.