Board Honors Students and Tennis Coach 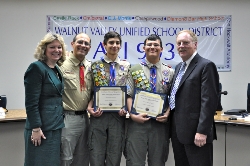 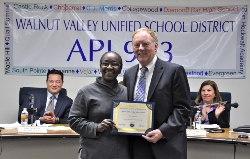 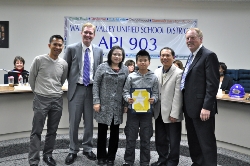 NEWS                                                                                        Walnut Valley Unified School District
FOR IMMEDIATE RELEASE                                                 880 S. Lemon Avenue
January 23, 2012                                                                     Walnut, CA 91789
Contact:
Kelli Gile, Office of Community Resources
kgile@walnutvalley.k12.ca.us
(909) 595-1261 ext. 31204
Board Honors Walnut Valley Students and Tennis Coach
WALNUT, CA--The Walnut Valley Unified School District Board of Trustees honored three students and a tennis coach for excellence during the January 18 meeting.
Chaparral Middle School 8th grade student Bill Liang was recognized as the school’s Super Star.
“Through a lot of hard work, the support of his parents, counselor, and teachers, Bill has become a model student at school. His grades are up, his behavior is just right, and he’s is doing things the way that I know he’s always wanted to,” said Principal Ron Thibodeaux.
The school prides itself on growth and staff members work with students to make sure that each of them is trying to become better from one year to the next, one day to the next, he said.
“I don’t think there’s a student on our campus who has grown more as a person and as a student than Bill. So for those reasons we wanted to acknowledge his growth and achievement this evening,” he added.
Board President Larry Redinger thanked the honoree for setting an example for new students on campus as he presented a Certificate of Special Recognition.
***
Two Walnut High School students, brothers Steven and David Tragarz, were honored for achieving the rank of Eagle Scouts, the highest rank attainable in the Boy Scouts of America program.
The uniformed Scouts stepped up to the podium and explained to the Board Members and audience about the activities they were required to complete in order to earn the remarkable award.
They both worked for several years earning badges and participating in scout camping trips.
Junior Steven Tragarz said he led and planned a community improvement project for the Eagle award. He built benches at Suzanne Middle School near the parking lot for students waiting to be picked up by their parents.
“To be a Scout, you have to be honorable, show dignity, and help others at all times,” he said.  Eagle Scout candidates are also required to pass a board review before they earn the honor.
David Tragarz, a 14 year-old freshman, said it took a lot of work to achieve the rank of Eagle Scout. His final project also focused on designing and building student benches at Suzanne Middle School.
He said he enjoys the Boy Scouts, camp outs, and earning badges. And he looks forward to going to school each day because of the learning, the teachers, and opportunity to meet new people.
**
The Board of Trustees honored Diamond Bar High School Tennis Coach Tisa Shavers with a Certificate of Special Recognition for being selected as the 2011 Coach of the Year by the San Gabriel Valley Tribune.
“This is their recognition for good work, leadership and teaching our students the value of not just winning matches, but how to handle themselves as student athletes during competitions,” said Superintendent Dr. Dean Conklin.
“She’s doing more than coaching by supporting the community in so many ways, and I’m proud to recognize her,” said Board President Larry Redinger.
“Tisa’s a great all-around individual. She supports Diamond Bar High and the School District attending outside events on a regular basis. She even shared a dessert with me at our recent Food Fest!” Board Member Cindy Ruiz added.
“This award certainly means a lot to me,” Shavers said. She has worked at DBHS for the past 12 years.
“I pride myself in representing this District and community, and really enjoy working with the kids,” she said adding that her goal has always been to fulfill the ‘students first’ mission.
“That’s what I really value,” she said.
Shown:
Chaparral 8th grader Bill Liang was honored as a Super Star by the WVUSD Board of Trustees on January 18. Also pictured: Intervention Counselor Hon Tran, Principal Ron Thibodeaux, parents Amy and Sam Liang with Board President Larry Redinger.
Eagle Scouts and brothers David and Steven Tragarz were honored by the WVUSD Board of Trustees on January 18. Shown with parents City of Walnut Mayor Nancy Tragarz and Scout Master Ken Tragarz, with Board President Larry Redinger.
Diamond Bar High School Tennis Coach Tisa Shavers was honored for being named the San Gabriel Valley Tribune’s 2011 Coach of the Year.  Shown with Board President Larry Redinger.