Board Honors Super Star Students and Coach of the Year 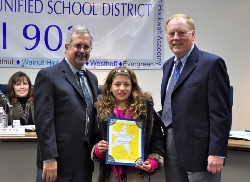 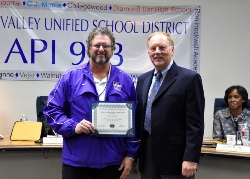 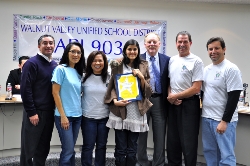 NEWS                                                                                        Walnut Valley Unified School District
FOR IMMEDIATE RELEASE                                                 880 S. Lemon Avenue
February 16, 2012                                                                   Walnut, CA 91789
Walnut Board Honors Super Star Students and Coach of the Year
Walnut, CA—The Walnut Valley Unified School District Board of Trustees honored two Super Star students and a Coach of the Year from Diamond Bar High School during the February 15 meeting.
Evergreen Elementary 5th grade student Jasmin Antuna was recognized as the school’s Super Star for showing tremendous progress and demonstrating perseverance.
Principal Dr. Don Trimmer described Jasmine as a hard worker with a positive attitude toward school. She is an accomplished swimmer and devotes much time to taekwondo. Jasmine is also very active in Girl Scouts and set a goal to sell 500 boxes of cookies this year. Last year she sold over 400 boxes!
“She is the epitome of perseverance and when she sets a goal, she reaches that goal,” Trimmer said.
2nd grade teacher Alice Oldag described Jasmine always having a positive attitude and as one of the hardest working students that she has ever taught.
Jasmine is a joyful learner whose positive attitude and cheerful demeanor make her a pleasure to teach and a pleasure to have in the classroom, said 5th grade teacher Lynn Otsu.
“At Evergreen, our motto is ‘Where Students Soar’. And when I think of a student who has truly soared, not just this year, but every year at Evergreen, I think of Jasmine,” Trimmer said.
**
Suzanne Middle School Principal Les Ojeda named 8th grader Alya Rehman as the school’s Super Star.
“We’re so blessed to have so many students in our District that excel not only academically but in many other areas to serve our community. Alya Rehman has made significant contributions during the last three years as a member of the school’s Conservation Club,” he said.
This year, she took on a leadership role as the club’s public relations officer and area captain for the weekly recycling program.  She also collaborated with another member to create the first website.
Alya has always been dependable, reliable, and hard working member. She works independently and always follows through to ensure that the job gets done. She is flexible, willing to work on any assigned task, and is quick to volunteer.  Alya is truly a valuable member of the club!
The Conservation Club’s mission is to create an informed community of young citizens who are actively engaged in environmental issues facing our planet and are well equipped to become lifelong ambassadors of the environment.
“Alya encompasses all of these attributes,” Ojeda said.
***
Superintendent Dr. Dean Conklin announced that Diamond Bar High School Coach Tony McCabe has been named the California Coaches’ Association Southern Section Coach of the Year for Girls’ Golf.
The criteria for selection for this award includes career coaching performance and excellence in the specific sport.  Additional factors include professional contributions of time, services, and dedication to the coaching profession and/or athletics.
Each year, one high school coach is selected for the California Coaches’ Association Coach of the Year in each sport.
This year, for the first time ever, the California Coaches Association is presenting Coach of the Year awards for each season of the sport for the Southern Section.
Coach McCabe was notified that he was selected as Coach of the Year for Girls’ Golf in January.
The coaches selected for the season of sport awards are automatically entered in the State Coach of the Year selection, along with coaches from the other nine sections.
Coaches are nominated by their peers and then five finalists are selected for each fall sport.
“Golf in Walnut Valley is outstanding. We have six girl golfers playing college golf. One, Alice Kim, who was All-American at UC Davis, is turning pro. And this year, all three of our seniors will be playing college golf next year,” McCabe said during the presentation.
Shown:
Evergreen 5th grader was honored as the school’s Super Star by the Board of Trustees during the February 16 meeting. Shown with Principal Dr. Don Trimmer and Board President Larry Redinger.
8th grader Alya Rehman was honored as the Suzanne Middle School Super Star on February 16. Shown with Principal Les Ojeda, teacher/advisors Jennifer Carr, Ramona Talampas, Steve Cusson, Ed Gautreau, and Board President Larry Redinger.
The WVUSD Board of Trustees honored DBHS Coach Tony McCabe with a Certificate of Special Recognition during the February 15 meeting. McCabe was named the California Coaches Association – Coach of the Year - Girls’ Golf. Shown with Board President Larry Redinger.