Walnut students having a wonderful time in spring musical 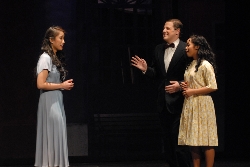 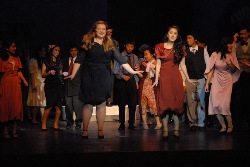 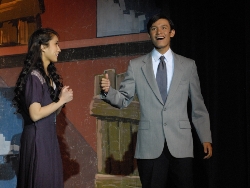 NEWS                                                                                      Walnut Valley Unified School District
FOR IMMEDIATE RELEASE                                               880 S. Lemon Avenue
March 15, 2012                                                                      Walnut, CA 91789
Walnut students having a wonderful time in spring musical
“Wonderful Town” on WHS stage March 16,17,23, 24
WALNUT, CA- Walnut High School cast members are excited to bring the spring musical “Wonderful Town” to the stage.
Lead actors are proud to be a part of the production set in the Great Depression and are certain audiences will fall in love with the show.
“Wonderful Town” follows the story of sisters Ruth and Eileen Sherwood who travel to New York City from Columbus, Ohio in search of love and fortune.
“It’s a very light-hearted musical that puts everyone in a good mood,” said senior Christianne Santiago, featured as Eileen Sherwood.
All the songs and dances are very different and the characters are relatable, she said.
“People are going to enjoy everything about this show. It a beautiful old-style musical,” said senior Elizabeth Horn who plays the role of the older sister Ruth.
“And it’s getting back to the way musicals were intended to be,” she added
My Sister Eileen, the collection of short stories on which the play and musical are based, recounts Ruth’s memories of growing up with her sister.
The “sisters” both agreed their favorite part of the production is Conversation Piece  - both a scene and a song.
Even though it’s written for 1935 and the slang has changed, “it’s adorable because it’s something that happens even today,” Elizabeth said.
Everyone in the room is so uncomfortable and nobody knows what to say, she said describing the scene.
“It’s so funny and our favorite part of the show to act and to watch because people are always laughing,” she said.
The award-winning production premiered on Broadway in 1953 winning five Tony Awards including Best Musical.  “Wonderful Town” is a musical with book by Joseph Fields and Jerome Chodorov, lyrics by Betty Comden and Adolph Green, and music by Leonard Bernstein.
“One thing that’s most certainly a standout of this show is the music. This year the music is so fun, and the dancing and choreography are amazing,” said junior Joseph Din, who plays the role of Franklin Lippencott.
“I really like this musical because Walnut usually does well known musicals, but this year’s show not that well known. I think it’s really nice that (Director Joanne) Ms. Karr is re-defining what we do,” he added.
When the audience steps into the theatre, they’ll be stepping into another time period, said sophomore Jared Lindsay, who plays editor Robert Beaker.
“’All the costumes are all very accurate for the Great Depression and the set pieces are really detailed,” he said.
The cast and crew have really bonded over the course of the three-month production.
“The great thing about the show is the many, many, many wonderful people that you get to know,” Jared said.
“It’s a real honor to be part of a very talented and experienced cast and crew,” said first-time actor senior Harris Nelson who plays Chick Clark, the town’s ladies man.
He has enjoyed being a part of the show’s family that cooperates and gets things done and the help he’s received from the seasoned veterans.
The Walnut High production includes 51 actors.
“It’ really nice to have such wonderful people in Wonderful Town,” he said.
“Wonderful Town” shows are March 16, 17, 23, 24 at 7 p,m.
A matinee performance will be performed at 2 p.m. on March 24.
Tickets are available at www.seatyourself.biz/walnutdrama . Please contact Director Joanne Karr at (909) 444-3699 for information.
The Walnut High School Performing Arts Center is located at 400 N. Pierre Road in Walnut.
Photos:
Courtesy of Randy Smith. Provided by Walnut High School.