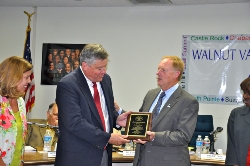 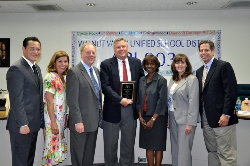 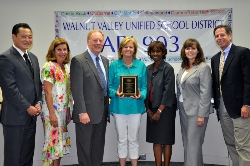 NEWS                                                                                        Walnut Valley Unified School District
FOR IMMEDIATE RELEASE                                                 880 S. Lemon Avenue
June 7, 2012                                                                             Walnut, CA 91789
Contact:
Kelli Gile, Office of Community Resources
kgile@walnutvalley.k12.ca.us
(909) 595-1261 ext. 31204
Leaving Their Legacy
Retiring Walnut Valley Cabinet Members Honored
WALNUT, CA—During the June 6 meeting, the Walnut Valley Unified School District Board of Trustees honored two exceptional Cabinet Members retiring at the end of the month.
Assistant Superintendent of Business Services Jack LeBrun received a special recognition plaque for 36 years of exemplary service to WVUSD students, staff, and the community.
He was he was first hired in 1977 as a teacher at Vejar Elementary School and served in a number of positions including principal at Westhoff, Collegewood, and Evergreen Elementary Schools.
“Jack has established genuine relationships with our staff members,” said Superintendent Dr. Dean Conklin.
“When Jack goes to the sites, he knows everybody - he knows their names and knows them personally - and that kind of connection is what makes Walnut Valley a family. He is truly loved in this District,” Dr. Conklin said.
“It’s been such a pleasure to work with you for the past 22 years,” said Board President Larry Redinger. “You’ve been phenomenal in your many roles.”
“Thank you for your leadership in getting the Bonds passed. I truly thank you for that,” said Member Nancy Lyons.
“Jack has been a role model for me. At the Walnut High graduation, I could see the pride he felt being part of the students’ lives. Several even came up to him and said ‘Hey Mr. LeBrun - thank you for your guidance!’” Member Phillip Chen said.
“There are so many policies and programs for students that you have guided. That positive impact will go on and on,” Chen added.
Director of Pupil Personnel Jan Keating received a special recognition plaque for providing 15 years of exemplary service in the District.
She has also served as Assistant Principal at Ron Hockwalt Academies, and Principal at Chaparral and Suzanne Middle Schools.
“We’ve had deep conversations about who we are as a district and we have an understanding that how we treat our most challenging kids is really the mark of who we are as a district,” said Superintendent Conklin.
“And Jan has been the one that has taken on that responsibility. Part of her role is to come up with solutions that are a “win-win.” Walnut’s been known for that for a long time,” he said.
“Former Superintendent Dr. Ron Hockwalt deeply believed in that. His legacy lives on in the actions and behaviors that we have every day. Jan has been the one to carry that,” Dr. Conklin added.
“Thank you for your leadership and being the “go-to” person to take care of student issues,” Board President Larry Redinger said.
“Jan is a great supporter of the District and her knack with kids with challenges in their lives and working with their families is amazing. We’re truly going to miss that talent that she brought to the District. You can’t replace it,” said Member Helen Hall.
“When it comes to the kids, I know you truly put the meaning in “Kids First,” said Member Cindy Ruiz.
During Walnut High’s Class of 2012 Commencement held on May 31, her former Suzanne students cheered when “Mrs. Keating” was introduced on stage.
“You both will be missed greatly,” Dr. Conklin said. “As I’ve talked to people during the past few weeks, your names have come up as a true legacy component in Walnut Valley’s history. You have helped shape this District,” he said.
Shown:
Retiring Assistant Superintendent of Business Services Jack LeBrun was recognized by the Board of Trustees on June 6. Board President Larry Redinger presented a plaque of special recognition.
Jack LeBrun was honored by Board of Trustees Phillip Chen, Nancy Lyons, Larry Redinger, Helen Hall, Cindy Ruiz, and Superintendent Dr. Dean Conklin.
Retiring Director of Pupil Personnel Jan Keating was honored by the Board of Trustees for providing 15 of exemplary service to the District on June 6. Shown with Memebers  Phillip Chen, Nancy Lyons, Larry Redinger, Helen Hall, Cindy Ruiz, and Superintendent Dr. Dean Conklin.