Transitional Kindergarten Kicks Off This Week 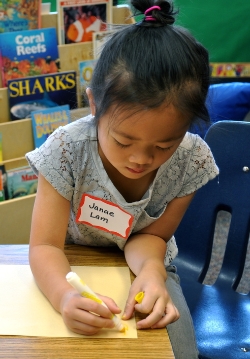 Historic launch of newest grade level in state since 1891
http://walnut.patch.com/articles/transitional-kindergarten-kicks-off-this-week-66a89078
Walnut Patch
August 23, 2012
By Melanie C. Johnson and Kristen Lepore
Transitional Kindergarten Kicks Off This Week
Approximately 40,000 students statewide are expected to begin transitional kindergarten this fall—a new grade serving younger students with fall birthdays.
With back-to-school season in full swing, more than 2,000 transitional kindergarten (TK) classes are opening their doors across the state, marking the historic launch of the first new grade introduced since 1891.
The Walnut Valley Unified School District launched its program Monday, as more than 14,700 students headed to back to school. The district is offering three classes of 24 students each, two at Vejar Elementary and one at Castle Rock.
TK teachers Bonnie Carren at Castle Rock and Carolyn Campbell and Irene Carter at Vejar have been preparing for the new program for about a year, according to the district.
“I was thinking this morning that we are a part of history and how exciting this is for our district," Carter said Monday. "We’re like pioneers aren’t we?”
Approximately 40,000 students statewide are expected to use the voluntary program—a new grade serving younger students with fall birthdays—according to Preschool California. Transitional kindergarten was established by the 2010 California state law that changed the kindergarten entry date so that children enter at age 5. It requires school districts to provide the program to children whose admission to kindergarten would be delayed.
"The first year of a two-year kindergarten program [will use] a modified kindergarten curriculum that is age and developmentally appropriate," according to the California Department of Education.
Transitional kindergarten will be offered at no immediate additional cost to the state, because funding that would have been used to support young 5-year-olds in kindergarten will be redirected to support those same children now in TK, says Preschool California.
Shown:
Janae Lam begins school in the new Transitional Kindergarten class. Credit WVUSD Kelli Gile