WVUSD Board Honors Community Partner, Eagle Scout, and Lions of the Year 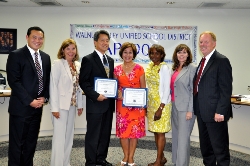 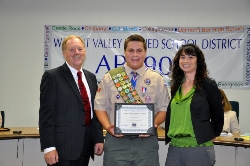 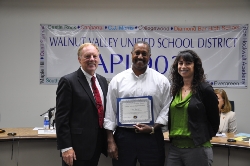 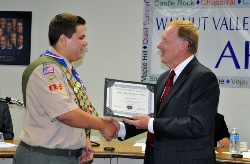 NEWS                                                                                   Walnut Valley Unified School District
FOR IMMEDIATE RELEASE                                             880 S. Lemon Avenue
September 26, 2012                                                           Walnut, CA 91789
Contact:
Kelli Gile, Office of Community Resources
kgile@wvusd.k12.ca.us
(909) 595-1261 ext. 31204
WVUSD Board Honors Community Partner, Eagle Scout, and Lions of the Year
WALNUT, CA—The Walnut Valley Unified School District Board of Trustees honored the Diamond Bar High School Partner in Education, Eagle Scout, and 2012 Lions of the Year during the meeting held on September 19.
Community member Clark Rucker was recognized with the Partners in Education Award for his ongoing support of Diamond Bar High School and the Walnut Valley Unified School District.
During his introduction, DBHS Principal Catherine Real shared a few of Clark’s stand out qualities that contributed to his selection for the new District award.
He is inspirational and inspires others to contribute their time, and to look past differences to form a united parent movement, which has been so instrumental to our success, she said.
“Mr. Rucker is positive and has a hearty and heartfelt laugh that puts everybody as ease. He encourages everybody to stay focused on our ultimate goal - our kids,” Real said.
He has begun new fundraisers on campus and has helped us see a new reality for fundraising possibilities. But he is probably best known for his devotion to not only to DBHS, but also to the District, she said.
“As President of the Magnificent 7 Parent Organization, this group is performing at levels they have never performed at before. Clark has been instrumental in helping me achieve the vision for the group – a united but diverse working model of collaboration,” she said.
“Thank you for this award – but as I say all the time ‘it’s not about me– it’s about the kids,’” Rucker said.
Board Member Cindy Ruiz added that Rucker goes above and beyond his numerous contributions at DBHS, while also serving on the District’s Coordinating Council, Director on the Walnut Valley Educational Foundation, and member of Council of African American Parents (CAAP).
“He participates in the entire community and we are very grateful for that,” she said.
Diamond Bar High School 2012 graduate Charlie Luber received a Certificate of Special Recognition for achieving the highest rank in the Boy Scouts of America  - the Eagle Award.
“If you came to see our musical last year “Fiddler on the Roof” - Charlie played our starring role and he was fantastic,” she said.
Wearing his official uniform and sash filled with merit badges, Luber described he built an 8’ tall trophy case and 6’ tall rolling cabinet for the DBHS Band Room for his final Eagle Award project.
Jack and Wanda Tanaka were honored for being named the 2012 Lions of the Year by the Lions Club International.
Board Member Phillip Chen congratulated the “dynamic duo” as he presented a Certificate of Special Recognition.
Just to put it in perspective of how competitive being named Lions of the Year is – they were selected from 1.35 million excellent candidates, 46,000 Lions Clubs, and 206 countries throughout the world, he said.
“They have done so many great things for our community and in mentoring over 300 students in the Leo Clubs at Diamond Bar High and over 70 students at Chaparral Middle School,” said Chen.
“Thank you so much for your tireless dedication,” he said.
“It was a fantastic honor to be recognized as Lions of the Year from Lions Club International,” Jack Tanaka said.  Twelve years ago, the couple launched a Leo Club at Chaparral and eleven years ago they formed another club at Diamond Bar High.
Students are involved in a lot of different service activities, not only within the community, but in different communities as well, he explained.
“I think one of the reasons that we were selected is our work with the kids. Lions Clubs also recognize that kids are our future. And by taking care of them today, they’ll be better citizens tomorrow,” he said.
Shown:
Clark Rucker received the Partners in Education Award during the Board Meeting held on September 19. Shown with Diamond Bar High School Principal Catherine Real and WVUSD Board President Larry Redinger.
Diamond Bar High 2012 graduate Charlie Luber received a Certificate of Special Recognition for achieving the rank of Eagle Scout. Shown with Board President Larry Redinger.
Eagle Scout Charlie Luber was recognized at the September 19 Board Meeting. Shown with DBHS Principal Catherine Real and Board President Larry Redinger.
Jack and Wanda Tanaka were honored for being named the 2012 Lions of the Year by the Lions Club International. Shown with WVUSD Board Members Phillip Chen, Nancy Lyons, Helen Hall, Cindy Ruiz, and Larry Redinger.