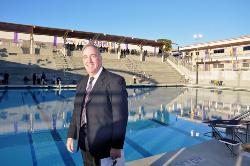 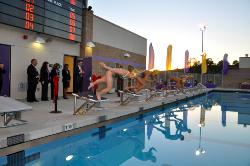 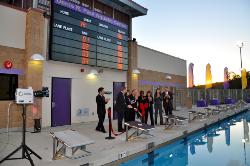 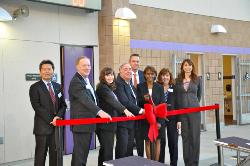 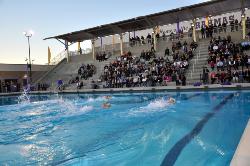 DBHS Denis R. Paul Aquatic Center Opens
NEWS                                                                                    Walnut Valley Unified School District
FOR IMMEDIATE RELEASE                                                   880 S. Lemon Avenue
December 13, 2013                                                               Walnut, CA 91789
Contact:
Kelli Gile, Office of Community Resources
kgile@wvusd.k12.ca.us
(909)595-1261 ext. 31204
Dive-in Day!
Denis R. Paul Aquatic Center Opens at Diamond Bar High
DIAMOND BAR, CA— Walnut Valley Unified School District and Diamond Bar High School celebrated the completion of the Denis R. Paul Aquatic Center on December 11.
Students, staff, community members, district and local officials attended the Grand Opening and Ribbon Cutting Ceremony held poolside at 4 p.m.
The $10.7 million construction projects of the 12-lane pool and adjacent 20-classroom math building were made possible through voter approval of Bond Measures S and Y passed in November 2007.
The two-story math building opened at the beginning of the 2013-14 school year and the Denis R. Paul Aquatic Center was also completed on schedule.
The special opening ceremony provided the community with a first glimpse of the long-awaited addition at Diamond Bar High School.
“In reality, we’ve always had a pool on this campus, at least in pictures,” retired Principal Denis Paul said during his commemoration speech.
“This has been a 32 year dream for this family,” he said.
Paul, one of the original Brahmas, said he and his family were humbled to have the name on the new facility. And he shared the honor with coaches, staff, parents, administrators and community members who worked tirelessly to make it happen.
“Today, this home got even more majestic,” he stated.
Principal Catherine Real thanked the community for their support that will enable the school to continue to provide a premium education for  students.
“I'm incredibly proud to be the principal during this momentous time in Diamond Bar High School's history," Real said.
She acknowledged Denis Paul for his vision and foresight for the Diamond Bar campus from its inception.
“Our Brahma Pride will forever be inspired by you. You laid the foundation of the four 'A's: Academics, Activities, the Arts, and Athletics and thanks to you, we are taking another historic step in supporting our students, our staff and our community," said Real.
"This is such a beautiful facility,” Superintendent Dr. Robert Taylor said.
“We can all be really proud to have this aquatic center in our community and in our school district.”
He also thanked the DBHS staff and students for their patience during the construction project.
“Your wait has truly paid off.”
“I want to echo the thanks to so many people that have been a part of this,” said Board President Helen Hall.
“I remember when I moved to Diamond Bar in 1980 this was just a mound of dirt. I’m not talking about the swimming pool dirt. There was absolutely no school here. There was a little sign saying future school,” she said.
“It takes a long time to build a pool. And our community and school district have been very patient waiting for this pool,” she said. The support of voters helped make it happen with the passage of Measures S and Y.
“And today, that picture has become a reality,” she stated.
The aquatic center also includes stadium seating with shade structure, locker room with men’s and women’s restrooms, public restrooms, coach’s room, pool storage building, pool equipment building and team room.
After the official ribbon cutting, the school’s Brass Ensemble played the Olympic Fanfare as the four varsity swim captains made a surprise entrance.
The crowd cheered as they took to the starting blocks.
And at the signal took their first dives into the clear blue.
The opening of the new facility marks the beginning for the school’s swim team having their own pool for practices and competitions.
Senior Captains Vivian Sun, Theresa Luk, Matthew Wu and Matthew Sia were very excited about the completion of the new pool.
“It’s really cool. We get to swim here instead of going to another school to practice. People will get to come to our home,” said Sia.
“People will get to know the swim team and be able to see us practice here,” Sun added.
“It means a lot because we finally have a place to call our own,” Luk said.
Dedication tributes played on several monitors during the reception. The school’s Chamber Orchestra and Marquis Choir performed at the milestone event.
The new pool will primarily be used for the school’s swim team and physical education classes, but will soon be open to the community for recreational activities during the summer as well.
“We’re really excited. It’s going to take us to the next level, not only in swim, but also in the community. It’s going to be great for everyone involved,” Athletic Director Kurt Davies said.
Shown:
The Ribbon-Cutting Ceremony officially opened the Denis R. Paul Aquatic Center. Shown: Denis Paul, Superintendent Dr. Robert Taylor, Principal Catherine Real, Board Members Helen Hall, Larry Redinger, Cindy Ruiz, Nancy Lyons and Y.Tony Torng.
DBHS Senior Swim Captains made a splash during the first dive-in during the aquatic center’s grand opening ceremony.
Retired Principal Denis Paul at Diamond Bar High School’s new aquatic center.