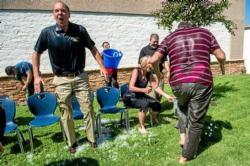 San Gabriel Valley Tribune
August 29, 2014
By Richard Irwin
Walnut Valley administrators recall friends in ALS Ice Bucket Challenge
Walnut Valley administrators remembered friends and family as they joined in the ALS Ice Bucket Challenge. It began at the high schools, before spreading to the school district headquarters.
Superintendent Bob Taylor answered the challenge from Walnut Principal Jeff Jordan on Friday. Jordan had taken the challenge during football practice the day before.
“I was happy to take the challenge because it’s a fantastic cause,” said Taylor. “It helps raise awareness for ALS. A relative of mine passed away from the disease so this has a special meaning for me.”
The challenge reached its peak on Wednesday, when six administrators answered Taylor’s challenge at the administration building. They lined up on a hot afternoon with temperatures reaching 100 degrees.
The nervous contingent included three assistant superintendents — Matt Witmer, Michelle Harold and Jeanette Ullrich. Joining them were directors Jose Annicchiarico, Sergio Canal and Jackie Brown.
The brave educators waited their turn as bucket after bucket of ice cold water doused them. The shock cause several to jump out of their plastic chairs on the front lawn.
But they all agreed it was for a good cause, raising money for ALS, also known as Lou Gehrig’s disease. And for one it was very personal.
“I’ve had a couple of friends die from the disease,” said Assistant Superintendent Witmer.
The gregarious administrator remembered one friend, Mark Plum, who died from the progressive neurodegenerative disease that affects nerve cells in the brain and the spinal cord.
“We had a group of friends who would go to Disneyland every Christmas to see the decorations and the rides,” Witmer recalled. “His family and mine always enjoyed this Christmas tradition together.”
After the computer businessman became disabled with ALS, his friends decided to take him to Disneyland one last time. They packed his wheelchair and headed to the “happiest place on Earth.”
“We were all so happy he could go,” Witmer said. “We took turns pushing his wheelchair and took him on a couple rides.”
The adventure gave Witmer a “lasting memory” when his friend died, leaving a wife and two young children.
“It was hard, but we pitch in help his wife when she wants to clean the garage or fix something,” Witmer added.
He wasn’t the only administrator to have a personal experience with ALS. School officials said Diamond Bar High School Principal Catherine Real lost her older brother, Tim, to ALS as a 32-year old.
“He was a big inspiration for doing this and continues to be an inspiration for me and my career,” Real told fellow administrators.
She took the Ice Bucket Challenge on Aug. 18 with Assistant Principal John Terry.
Senior football player Isaiah Thompson had issued the challenge. So the administrators met the team on the stadium field to get doused with ice water.
They challenged every other principal and assistant principal in Walnut Valley Unified. Walnut High’s Jordan was one of the first to respond.
Other administrators included Suzanne Middle School Principal Les Ojeda and Assistant Principal Amy Smith.
Knowing the polar plunge was for a good cause, some even seemed to enjoy it.
“I thought it was kind of refreshing because it was so hot out,” said Director Annicchiarico.
Shown:
Walnut Valley Unified faculties, from left, Michelle Harold, assistant superintendent of human resources, Sergio Canal, director of pupil services, Jeanette Ullrich, assistant superintendent of business services, Matthew Witmer, assistant superintendent of educational services, Jose Annicchiarico, administrative director of educational services, and Jackie Brown, director of educational programs, participated in the ALS ice bucket challenge in front of the district office in Walnut on Wednesday, Aug. 27, 2014. (Photo by Watchara Phomicinda/ San Gabriel Valley Tribune)

Matthew Witmer, assistant superintendent of educational services, left, reacts after being dumped with a bucket of ice water in the ALS ice bucket challenge in front of the district office in Walnut on Wednesday, Aug. 27, 2014. (Photo by Watchara Phomicinda/ San Gabriel Valley Tribune)