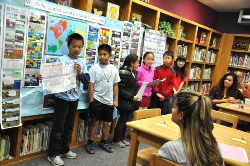 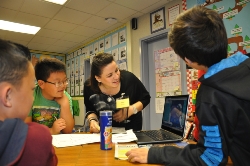 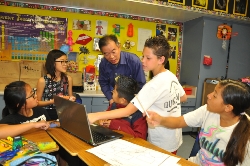 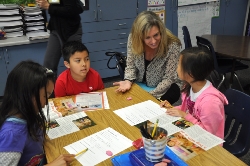 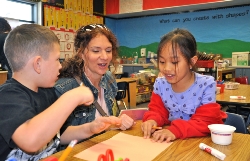 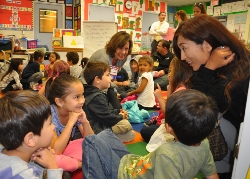 Contact:
Kelli Gile, Office of Community Resources
kgile@wvusd.k12.ca.us
(909) 595-1261 ext. 31204
Walnut Valley Parents Get Close-Up Look at Common Core
WALNUT, CA--Walnut Valley Unified School District parents recently stepped into classrooms to see the new Common Core State Standards in action.
Vejar Elementary opened its doors to a delegation of 35 parent leaders and administrators on February 26.
“We want to provide parents with an opportunity to see firsthand what Common Core looks like in practice and what the instructional methodology looks like and sounds like,” explained Superintendent Dr. Robert Taylor.
Members of the Coordinating Council parent leadership group represented all fourteen schools during the tour.
“We’re excited for this opportunity to show what’s happening in classrooms with the transition into Common Core,” said Assistant Superintendent Dr. Matthew Witmer.
Teaching and learning looks different in classrooms with the implementation of Common Core.
Along with implementing the new standards, there is a shift in the way instruction is taught in classrooms, embedding 21st century skills of collaboration, communication, critical thinking, creativity and citizenship into the curriculum.
Students have become involved with projects and collaboration, along with expressing and writing about their thinking processes in all subject areas, including mathematics.
The tour offered a snapshot into this transition.
Parents split into small groups with WVUSD principals and administrators to tour all grade levels – transitional kindergarten through fifth grade.
“The idea is just to see the progression being made in our classrooms,” Dr. Taylor said.
Parents joined the tour to get answers and become informed about the new program.
“I think it’s good to see what’s being implemented and see what the kids are learning, “ said C.J. Morris Elementary parent Fred Davies. “I want to be able to offer guidance to other parents.”
“I’m very interested in seeing what Common Core looks like,” said Collegewood and Walnut Elementary parent Lily Eibert.  “And I want to share with other parents.”
“The more we get to understand it and see the impact on students, I think the more comfortable we all are as we make this transition,” Dr. Witmer added.
During the tour, parents immediately saw visible student engagement, interactive instruction, and increased use of technology.
In Carolyn Campbell’s kindergarten class, youngsters were practicing 21st Century skills to create an object with tiny paper triangles.
“I like seeing all the collaboration and group learning. It seems like all the kids are engaged!” shared Suzanne Middle School parent Veronica Bejareno.
“I appreciate the real-life situations in the math word problems,” added Eibert. “Hopefully it means more to the kids knowing how it applies to their lives.”
Westhoff parent Valarie Lu noticed how students valued each other’s opinions and took corrections from each other.
In Jamie Highstreet’s 2nd grade class, students worked on a structure of writing assignment.
“I could tell they really understand because I asked them what a caption was and they told me,” said Walnut Elementary parent Molly Mendoza.  “They really got it.”
Groups visited each class for 15 minutes and then debriefed outside.
Evergreen parent David Chen questioned fifth graders in Lora Wilson’s class whether they liked working on their “Cause and Effect” computer-based research project by themselves or in a group.
“All of them said they liked working in a group!” he reported to other parent leaders.
“We saw kids collaborating and working in groups. It just seemed like they’re learning more and doing a lot more thinking – which is good!” said Sam Castonera from Castle Rock.
Chaparral Middle School hosted a school-wide Common Core parent tour on December 9 in Language arts, science, math, and social studies classes.
Castorena said he was “amazed” seeing the changes taking place in Walnut Valley classrooms.
Diamond Bar parent Yara Sands was very impressed during the visit to an 8th grade Language arts class.
“In the past, students read a book and took a 10-question quiz - and that was it,” she noted.
During a multi-layered assignment, the class studied about the author Edgar Allan Poe and discovered that his wife and several family members died of tuberculosis.
To integrate science into the lesson, students also read an article by the American Lung Association about the disease. And finally, they wrote a letter to the famed author to describe how the women in his life could have been saved, citing evidence from the article.
“They’re digging in deeper and deeper. It was a great experience and made me even prouder to be a Chaparral Cougar!” exclaimed Sands, the school’s Community Club president.
Castorena shared that he had a certain perception about the new standards when he went into the experience at Chaparral.
“And by the time we were done it had changed. I think Common Core is probably one of the biggest benefits that we’re going to see in our country for a really long time.”
“The conversations after the tour were amazing.  Parents gained an awareness of how literacy is incorporated across all subject areas and observed some of the real world examples and applications,” Dr. Taylor added. “I think this separates us from other districts around the country. We’re doing something that is really unique.”
Shown:
Walnut Valley parents got a close-up look at Common Core in action during a tour at Vejar Elementary on February 26.  Shown: Parent Jennifer Li checks in with kindergarten students learning about collaboration.
Vejar Elementary fifth graders shared what it’s like learning Common Core with visiting parents on February 26.
Parent Christina Kondo chats with kindergarteners ready to create a design with triangles during a Common Core tour at Vejar Elementary.
Parent Yara Sands takes a close-up looks at Common Core in a fifth grade class.
Vejar Elementary fifth graders were eager to share with visiting parent David Chen during a tour on February 26.
Walnut Valley parents got a close-up look at Common Core in action during a tour at Vejar Elementary on February 26. Shown: Parent Molly Mendoza learns how second graders are adapting to the new standards.