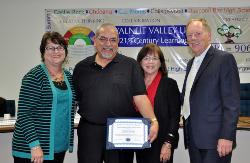 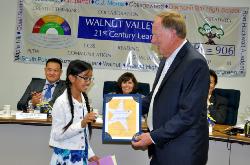 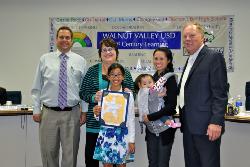 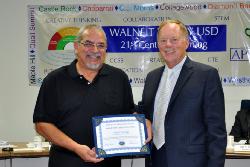 Contact:
Kelli Gile, Office of Community Resources
kgile@wvusd.k12.ca.us
(909) 595-1261 ext. 31204
Board of Trustees Honor Star Student, Community Partner
WALNUT, CA—The Walnut Valley Unified School District Board of Trustees paid tribute to an exemplary student and community partner from Walnut Elementary during the March 18 meeting.
Maia Tordillo was presented with the Super Star Student Award.
“Maia is a model fourth grader who exemplifies everything that Walnut Elementary wants our students to be,” said Principal Janet Green.
Tordillo is an enthusiastic leader who is the first to take on challenges and try something new. The straight-A GATE student participates in every opportunity that comes her way.
Her interests reflect her outstanding attitude toward academics, school service, citizenship, and the acquisition of 21st Century skills.
“When given the choice for her Genius Hour STEAM activities, she chose Computer Coding and Techie Trailblazers.  There is a bright future ahead for Maia Tordillo!” Green added.
Crispin Tarango was recognized with the Partner in Education Award for his dedicated support at Walnut Elementary.
Green stated that Tarango has been her “right-hand man” since she arrived at the school five-years ago.
“The impact a top-quality noon aide like Crispin can have on the environment of an elementary school is immense.”
Tarango helped create the current lunch schedule with the needs of students at the forefront.  He maximizes his two and one-quarter hours on campus and creates a safe and structured time on the playground.
As one student said, “Thank you for also participating in recycling and picking up trash because the little things you do make a huge difference at school and on the earth.”
“Crispin Tarango makes a huge difference at Walnut Elementary!” added Green.
Shown:
Walnut Elementary fourth grader Maia Tordillo was honored with the Super Star Student Award during the March 18 meeting. Shown with Board President Larry Redinger. (6197)
Shown with Principal Janet Green, Teachers Jeff Almberg, Jill Takayama, and Board President Larry Redinger. (6205)
Crispin Tarango was recognized with the Partner in Education Award for his outstanding service at Walnut Elementary. Shown with Board President Larry Redinger. (6214)
Shown with wife, Principal Janet Green, and Board President Larry Redinger. (6216)