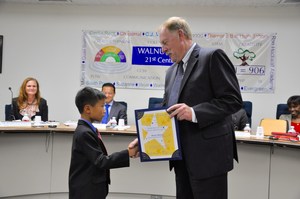 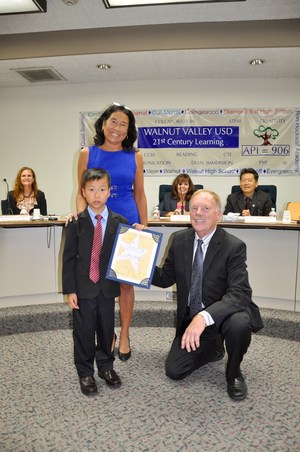 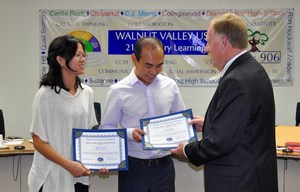 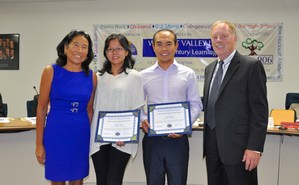 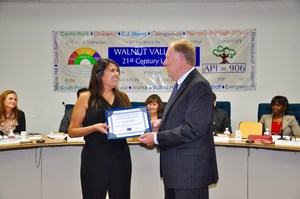 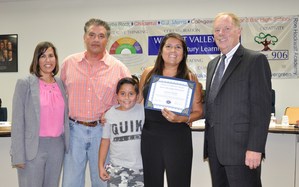 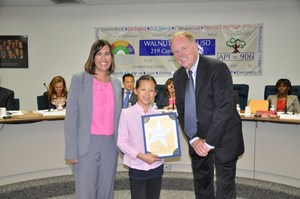 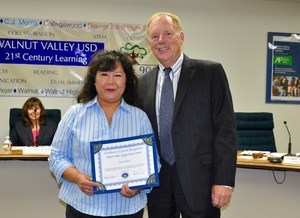 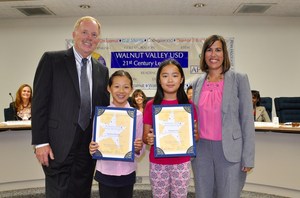 Last year, he won the 4th place award in the 2015 National Elementary Chess Championship sponsored by the U,S, Chess Federation. Over 2,000 players representing 40 states vied in the contest held in Nashville, Tennessee.

During a tourney exhibition, chess grand master Irina Krush, the nation’s top female player, conducted 30 simultaneous games against the chess prodigies. She won 29 games and had one draw.

“And that was to Brian!” announced Principal Caroline Wills.

“They are the company behind Brian’s achievement,” Wills added.

King’s Land Chess offers school programs and hosted a one-week chess camp during the summer. The couple also made a generous donation in support of the school.

Vejar Elementary parent Lorena Trujillo was recognized as a Partner in Education.

The mother of three boys has been a dedicated volunteer at the school for over nine years.

“She is an active member of the community club and is always available to our support teachers,” said Principal Jennifer De Anda.

Trujillo has also started a walking group with other moms in the mornings.

“She has just been great at drawing the community together!”

“Last year, the girls saw a need for recycling at the school. They felt the environment and animals had been impacted by all the trash.

On their own, they researched, secured recycling bins, and promoted the program to students.

This year, they have connected with student leaders and advisors for the Grades of Green trash-free program.

“Thank you for your service to Vejar and to our environment!” De Anda added.

Classified employee Dori Valdez, a student data program specialist, received a special recognition during the meeting for outstanding support to the District. Valdez was recently

"We can’t thank Dori enough for all that she does for our school district,” said Superintendent Dr. Robert Taylor.

The State of California requires detailed data for about 15,000 students and employees.

“Dori is the person that makes it all happen,” Dr. Taylor added.

The District has received numerous accolades for exceptional data management.

Valdez was also lauded by the state with the CALPADS Data Management Recognition.

Evergreen Elementary second grader Brian Huang was honored as a Super Star Student during the September 16 Board Meeting, Shown with: Board President Larry Redinger.

Shown with: Principal Caroline Wills and Board President Larry Redinger.

Shown with Principal Caroline Wills and Board President Larry Redinger.

Vejar Elementary parent Lorena Trujillo was recognized with a Partner in Education Award during the September 16 Board Meeting. Shown with Board President Larry Redinger.