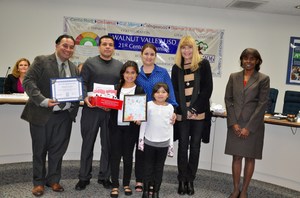 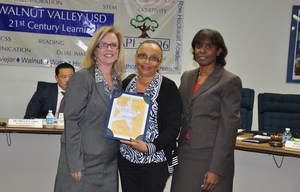 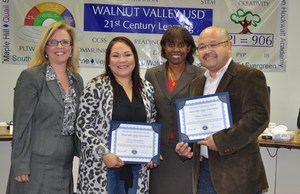 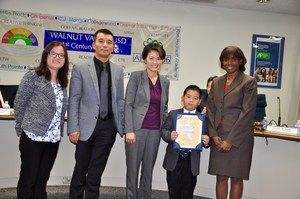 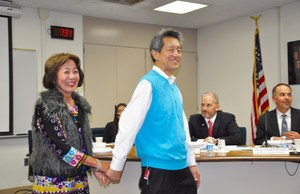 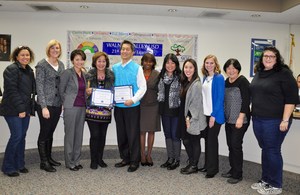 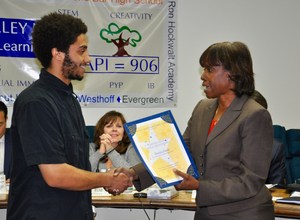 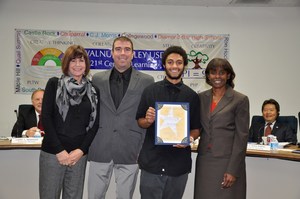 WALNUT, CA—During the January 20 regular meeting, the Walnut Valley Unified School District Board of Trustees paid tribute to star students and valued volunteers who are making a difference in schools.

CJ Morris Elementary 4th grader Alejandra Urrieta won the 2015 “Holidays Around the World” greeting card contest. The talented young artist was recognized with a certificate and framed copy of her entry by Board President Helen Hall. She also received a family gift pack to Chick fil-A restaurant courtesy of owners Bob and Michelle Sun.

“Alejandra is a wonderful young lady. She always has a smile on her face, is kind to others, works hard, and is a really good artist!” said Principal Shehzad Bhojani.

The school, now known as “Team Coben”, created a video get well message where students, staff, and parents shared special sentiments, words of encouragement, and even a dance from his classmates.

“Coben is my hero,” sang teacher Elvonne Vance during the presentation.

“He is battling leukemia like a Jedi,” Perez added.

“Collegewood’s Partners in Education wrap their arms around our school community to help us serve our students and prepare them for what’s next in life. Mr. and Mrs. Tamashiro have served for over 10 years and together have provided a level of service leadership that is truly commendable,” said Perez.

The active Community Club members have helped chair numerous events including staff appreciation luncheons, carnivals, after-school snack sales, and Night of Giving. For the past several years, they have designed and taken photos for the school yearbook.

An avid chess player and member of the US Chess Federation, for the past two years Jonathan competed in the National K-12 Championship held in Orlando, Florida. Both years he took 1st place in his grade level division and returned to school with a huge trophy and a heartfelt message for his principal.

“He said, “Look, I what won for Quail Summit!” Principal Jeanette Koh shared.

Koh said she was impressed with his love and passion for the game, which he wants to share with schoolmates. Soon Jonathan, with the help of his parents, will be starting a chess team.

“Now when he goes on these competitions, he will have a Quail Summit team!” Koh added.

Longtime volunteers Jack and Wanda Tanaka were lauded as Partners in Education for Quail Summit.

“They exemplify serving from their heart,” Principal Koh shared.

“They’ve given so much to our staff – we think we are their favorite school!” Koh said as teachers cheered in the audience.

Each year, the Tanakas supervise the set up of a haunted mansion for the school carnival with 30-50 middle and high school Leo Club volunteers.

“They come for the entire week! On the night of the carnival stay after 10 p.m., until the last piece of trash is picked up!”

“We are so honored and privileged to have this relationship with Mr. and Mrs. Tanaka,” said Koh.

“Giving without the expectation of something in return is the true definition of kindness. Jack and Wanda’s kindness and giving to the community is priceless,” said Board President Helen Hall.

“TJ is a model student,” said teacher Frank De Anda. “This young man is a beacon of hope for all students on our campus and I’m really proud to be his teacher.”

“Every month we host an assembly that talks about HOPE and brings it personally to our students,” said grade level coordinator Sue McCracken.

“For this last one, TJ put together a HOPE rap for our students – it was awesome!”

“TJ has embraced the concept of choice. He chooses to be a good student and most importantly he chooses to focus all his efforts on the present and keeps working to achieve his goals. He chooses to be hopeful in the face of setbacks and adversity. He chooses success!” said his alternative high school advisor.

The Sanlo Homestay Foundation was honored as the Ron Hockwalt Academies Partner in Education. The award was presented to chairman Ernie Quejado and co-chair Bella Cristobal.

“We can’t say how much we appreciate you and how much it’s done for the kids,” said De Anda.

The WVUSD Board honored volunteers Jack and Wanda Tanaka as Partners in Education for Quail Summit on January 20.