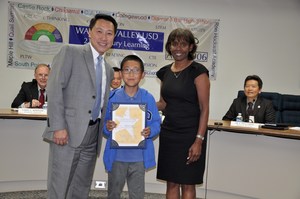 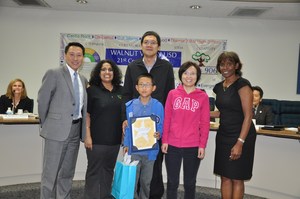 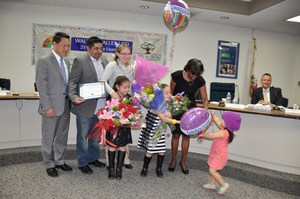 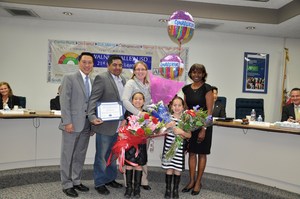 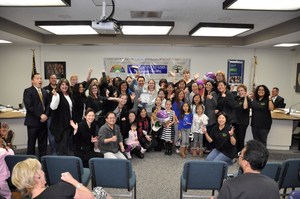 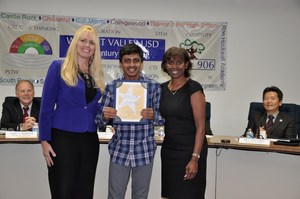 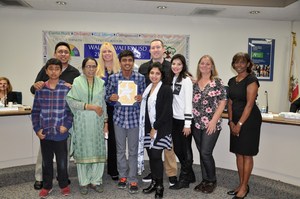 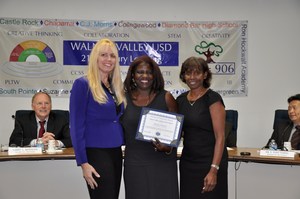 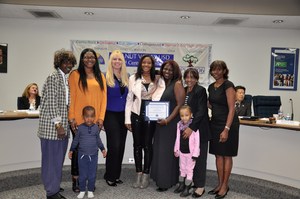 “Allan is a bright, hard-working student with an eagerness to learn,” said Principal Robert Chang.

Allan is articulate, outgoing, and has a deep passion for reading. His teacher commented that he’s usually one of the first students in class to finish his work and will typically pull out a book and read.

Allan is also a well-liked student and often reaches out to new students at the school. One classmate said, “Allan is willing to be friends with anyone and everyone.

“Allan has a caring heart and an optimistic outlook on life. He stands out from the crowd in a positive way!” Chang added.

Walnut Elementary parent April Alvarado was honored with the Partner in Education Award.

April stepped up and volunteered to be room parent when no other volunteers could be found. She helped plan, collect funds, and throw parties for many classes across the campus.

“She has two amazing daughters at our school, but you would think she has at least a dozen based on the number of classes for which she was listed as room parent,” Chang said.

April has also provided numerous donations to help special projects across the school, including materials for Genius Hour, books, egg incubators and materials for chick hatching.

“She is the type of person Nike must have envisioned when they came up with the slogan ‘Just do it.’” one teacher said.

April is president of the school’s Community Club, which is now thriving financially with a diverse membership.

“Thank you for all that you do for our school, our staff, and most importantly for our students. You are truly a super hero!” Chang added.

Ridwan was selected from 1,000 students on campus for the honor.

“He’s a remarkable young man who always strives to do what is right and do his best,” Principal Susan Arzola said.

Ridwan is a member of the school’s associated student body and competes with the track team.

This year, Ridwan went on an exciting adventure in Bangladesh.

Principal Arzola shared how Ridwan figured out a way to go online and download all of his assignments, and turn them in - all on time. As a result, he achieved an impressive 3.7 grade point average!

She serves as Community Club co-vice president and provides generous assistance during numerous events including a recent e-waste fundraiser.

Joanne organized the first STEM-themed “Dinner Under the Stars” for students and their parents. She donated snacks for an 8th grade dance when she learned there were no funds in the budget. She also provides ongoing support for the choir department by selling nachos on campus every Friday.

“She works to make sure all of our students’ voices are heard in the choir,” Arzola added.

“Joanne’s here putting in all these volunteer hours and helping us achieve our goals and dreams because she loves her granddaughter so much!”

Nicole Gutze, a Project Lead the Way (PTLW) affiliate assistant at the Cal Poly Pomona College of Engineering was honored with a Partner in Education Award for her ongoing support with South Pointe’s PTLW program.

“When South Pointe came up with an idea to offer engineering and biomedical opportunities during the summer – Nicole was on board,” said Principal Arzola.

During a tour, the group of middle school students were matched with engineering students to get a more enriching experience at Cal Poly.

Nicole also organized a day of activities for 20 young women at the College of Engineering with the hope of inspiring them to become female engineers!

The WVUSD Board of Trustees lauded Walnut Elementary fifth grader Allan Lyu with the Super Star Student Award on February 17. Shown with Principal Robert Chang and Board President Helen Hall.

Walnut Elementary parent volunteer April Alvarado was recognized with the Partner in Education Award during the February 17 Board Meeting. Shown with Board President Helen Hall, family members, and Principal Robert Chang.