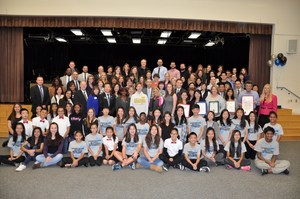 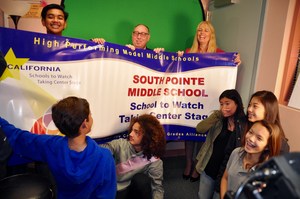 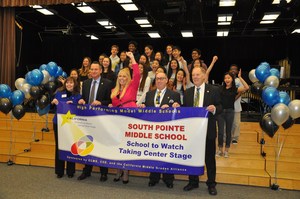 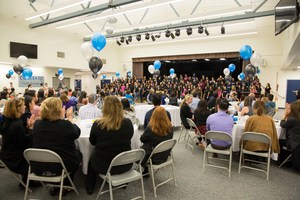 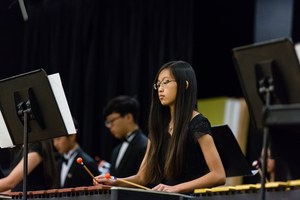 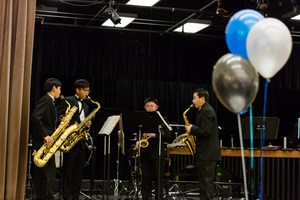 DIAMOND BAR, CA—It was a day of celebration, as South Pointe Middle School joined an elite cadre of official Schools to Watch on February 18.

Students, parents, staff, district officials, and community members came together to mark the school’s designation as a model school in the 2015-16 Schools to Watch-Taking Center Stage (STW-TCS) program.

Schools to Watch, which are also recognized at both the state and national level, become examples for middle schools across the country.

“This is a wonderful recognition,” said Superintendent Dr. Robert Taylor. “On behalf of the School District and Board of Trustees, we’re so proud of all of you in the room that made this possible.”

A total of only 78 high-performing schools, out of over 1,300 middle schools in the state, are now Schools to Watch.

Impressive student performances were featured by the choir and percussion band, under the direction of Robin Wadsworth and Susan Willmering.

“South Pointe offers such a well-rounded experience for kids,” Taylor added. Schools to Watch host visitors who are looking to learn best practices they can use to improve their middle grade schools and close the achievement gap.

After the ceremony, students and staff cheered in classrooms as the Schools to Watch banner was presented during the KSPS live morning news show.

“We are confident that you students will go on from here and do great things in the future,” said STW-TCS co-director Dr. Irvin Howard unveiling the award with Principal Susan Arzola.

“That’s what we know about Schools to Watch – they are special places that really make your education even more special and your future even brighter!”

“Students, you make this an amazing place where we’re all proud to teach and learn together,” Arzola said during the broadcast. “Teachers, we know that you are on the cutting edge and that you are always looking for ways to inspire your students!”

South Pointe will be recognized at the state level in Sacramento on February 25 and at the national level in Washington D.C. this summer.

South Pointe choir and band perform during the Model School celebration on February 18.