District Teacher of the Year Announced 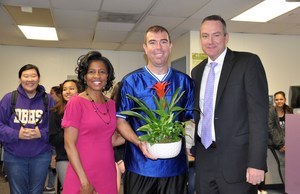 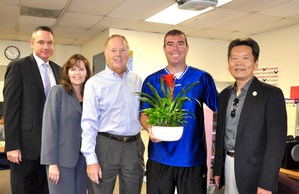 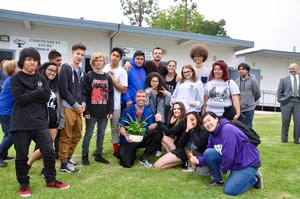 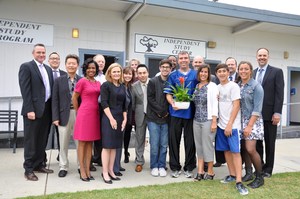 2016 District Teacher of the Year Announced

Superintendent Dr. Robert Taylor, Board Members, and Cabinet made a surprise visit at the Ron Hockwalt Academies (RHA) on May 4 to announce the 2016 District Teacher of the Year.

“Of about 700 Walnut Valley teachers, only one is chosen to represent the District,” said Dr. Taylor.

“I’m so happy to announce that this year it’s Mr. Frank De Anda!”

Students and staff cheered in unison at the well-deserved accolade for the popular Independent Study educator who has spearheaded many new projects and been successful in increasing school spirit on campus.

“This man has come up with a thousand ideas,” said teacher Jim Talbert. “This has been your year – you have been amazing!”

“As we’ve reestablished our program, Mr. De Anda’s handprint is everywhere at this school – in the classroom and throughout administration,” said Grade Level Coordinator Sue McCracken.

De Anda will now represent the District during the Los Angeles County Teacher of the Year competition.

All 15 site WVUSD Teachers of the Year will be honored during the annual "Salute to Teachers" program in the fall.

Congratulations to RHA teacher Frank De Anda, who has been selected as the 2016 District Teacher of the Year! Shown with Principal Donna Hunter and Superintendent Dr. Robert Taylor.