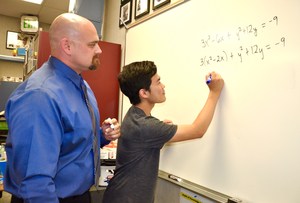 WALNUT, CA— The Walnut Valley Unified School District Board of Trustees has voted to move forward with plans to put a $152,880,000 general obligation bond measure on the November ballot.

The unanimous decision to approve the project list and resolution for the upcoming election was made during the August 10 meeting.

“We are so excited to move forward with the bond knowing that all of our schools will benefit from it,” said Board president Helen Hall. “It’s a ‘win win’ for our district.”

Two prominent groups proclaimed their support of the school bond during public comments, before the Trustees cast their votes.

United Walnut Taxpayers (UWT) members Layla Abou-Taleb and Mansfield Collins took to the podium to announce the endorsement of the community group.

Additionally, Lily Eibert, president of the WVUSD Coordinating Council, announced that the school parent groups have given their resounding approval.

Abou-Taleb and Collins said they have been happy with the transparency of the District’s plan and willingness of officials to work closely with the community.

“I am pleased to say that after reviewing the draft bond project list and resolution presented to the WVUSD Board of Trustees, UWT will be endorsing the bond measure come November,” Abou-Taleb said.

“We commend Dr. Taylor and his staff for being transparent and open to community input and involvement in the process.”

The representatives are Walnut residents and have been neighbors in the Timberline development for the past 30 years.

Abou-Taleb explained they have worked hard to become bond experts in recent years.  Both attended a recent town hall meeting, held on July 7, where residents were encouraged to give feedback on the District’s vision on the potential bond.

During the August 10 Board meeting, they declared Walnut Valley’s plan as a “good” bond for the future of the schools and community.

Eibert, also a Walnut resident, attended Walnut Valley schools and is proud that her two sons are continuing the tradition of excellence.

"I've seen the improvements that school bonds have made from when I attended Walnut Valley Schools.  I think it's important to continue investing in our schools' infrastructures and facilities,” she said.

“The approved project list is the result of months of hard work and reflects a collaborative partnership with the community, WVUSD staff, parents, and other stakeholders,” said Superintendent Dr. Robert Taylor.

“We’re definitely grateful for their support. They helped us shape the bond we present to you today,” he said before the vote.

Taylor explained that the implementation of a facilities master plan, feedback from school site teams on every campus, town hall and small group meetings, school tours, and two years of community polling, helped guide the development of the project list.

“We’ve taken all of this information and created a potential bond plan and project list that addresses the needs of our students - our highest priority - and reflects the input and contributions of our community,” he said.