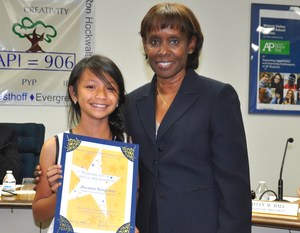 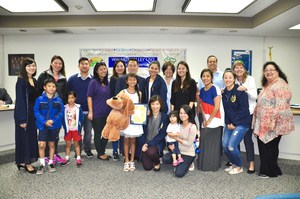 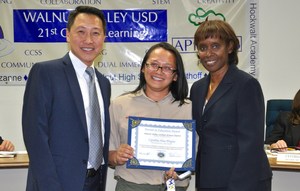 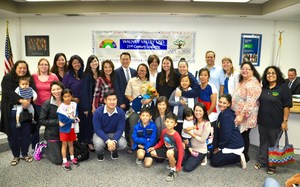 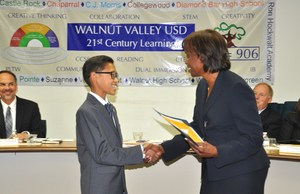 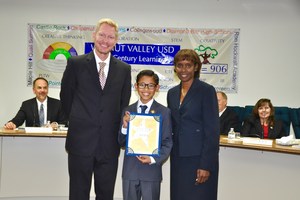 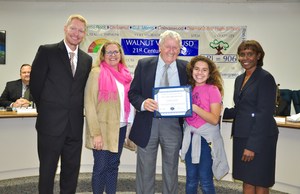 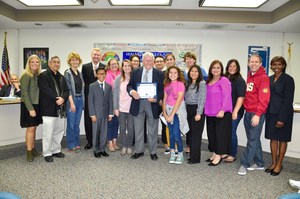 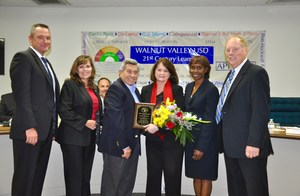 November 17, 2016WALNUT, CA—In keeping with tradition, the Walnut Valley USD Board of Trustees paid tribute to outstanding students and community partners during the November 16 meeting.

“It was a pleasure having Breanna in the first cohort for the Dual Language Immersion Mandarin Program. She always had a bright smile that would light up the room,” said kindergarten teacher Carol Chang.

“She is a polite, hard-working, cheerful, and resilient girl. Her optimism and cheerful disposition are truly inspirational,” added 2nd grade teacher Amy Wu.

“We are proud to see Breanna succeed. Even in tribulations, her upbeat and positive nature make her a breath of fresh air in the classroom,” said her 4th and 5th grade teachers.

Cyndi began as a classroom volunteer five years ago and quickly became an active Community Club member. She is a problem-solver who happily tackles any task with a smile.

“Now, Cyndi oversees the largest fundraiser at our school and doesn’t bat any eyelash at the number of items and prizes. She is also a spreadsheet queen!”

“Cyndi does so much for our students and staff members that we would be lost without her,” Chang said. “Her dedication and selflessness do not go unnoticed.”

“At Chaparral, we celebrate the well-rounded student – and Ryan is a stellar student,” said Principal Ron Thibodeaux.

The honor-roll student holds a 4.0 GPA and is the current ASB present, as well as founding member and president of the Future Business Leaders of America Club.

Ryan is involved in several clubs around campus, volunteers in the library, and plays cello in the advanced 8th grade Sinfonia orchestra. This spring, he’ll be appearing as LeFou in the musical “Beauty and the Beast.” Additionally, Ryan is a member of the league championship cross country team and competes internationally with the USA Taekwondo team.

Chaparral grandfather and resident artist Cornelis Greive was lauded with the Partner in Education Award.

“I quickly made a phone call to take the family up on the generous offer.”

Since then, Cor has probably spent 1,000 hours painting each Tuesday and Thursday around the campus.

He also lent his talents to Maple Hill Elementary when his granddaughter Grace attended the school.

“Cor’s added a lot of color to classrooms and hallways and brightened up our beautiful campus,” Thibodeaux added. “And he’s promised that we’ll have him for three whole years!”

“Your work on the Personnel Commission will never be forgotten,” said Board President Helen Hall.

“We can not thank you enough for your time and commitment to this job.”