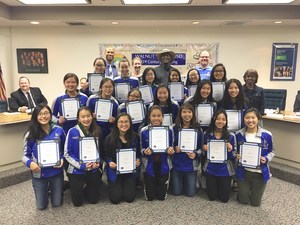 The undefeated Mustangs won their first title by edging out Troy by three strokes at Red Hill Country Club in Rancho Cucamonga.

“We’re extremely proud of these girls. All of your hard work paid off - give yourself a round of applause!” praised Principal Brandon Dade.

Additionally, senior Anabelle Chang was named Player of the Year and head coach Cecil Woods was tapped as Coach of the Year by the San Gabriel Valley Tribune.

Each team member received a certificate of special recognition during the Board meeting held on December 14.

Walnut finished third in 2013 and second in 2015 during the State playoffs.

“The girls did what they practiced to do all year and I am so proud of them,” Woods said.

“Ladies, thanks for a great season. You will forever be known as the 2016 California High School Girls Golf State Champions!”