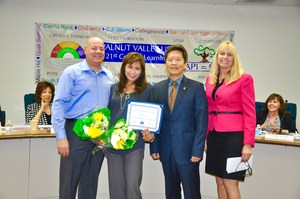 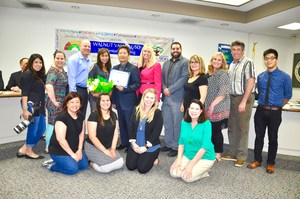 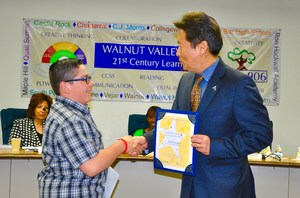 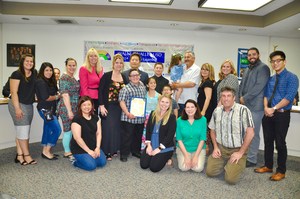 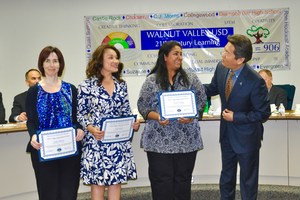 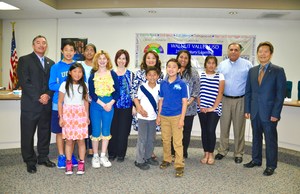 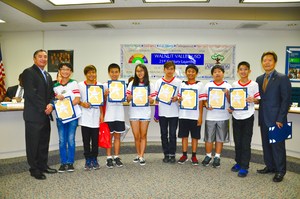 During the March 15 meeting, South Pointe and Suzanne Middle School leaders took to the podium to introduce their hand-picked honorees.

South Pointe parent Annalisa Gore was lauded with the Partner in Education Award. She has served as community club president for the past two years.

Annalisa is a collaborative leader who leads by example and has a magical way of making all parents feel like they belong.

“Annalisa is willing to roll up her sleeves and help in any way she can, including selling bobas!” said Principal Susan Arzola.

South Pointe 8th grader Ivan Vazquez received the Super Star Student Award. Although he has faced many challenges in his short life, it has not limited Ivan from achieving success.

The young man is a positive role model who puts a smile on his face for anyone who crosses his path.

If Ivan sees a classmate that is having a hard day, he lifts them up. If he sees an adult that needs a helping hand, he’s there to offer it.

“Ivan is always positive, pleasant, compassionate, helpful, considerate, and greets you with a smile,” Arzola said.

“We are very proud of Ivan and all of his accomplishments and all the contributions he makes to the school!”

“These students have gone above and beyond to represent our school in a positive way,” said Principal Les Ojeda.

The team is coached by advisor Vicky Silcock, and parent volunteers Jonathan Fong and Daffodil Robles.

The Roboheroes recently won the Core Values Inspiration Award at the Los Angeles Regional Championship and has been invited to represent the region at an international championship tournament sponsored by NASA in West Virginia this summer.

“These wonderful ladies put in endless hours of service for our school,” Ojeda said.

This year, the community club board members planned and organized numerous school events including a successful booster drive that raised over $65,000 to provide technology, teacher intervention, curriculum books, and other valuable student resources.

“You have led with passion and enthusiasm, and as a result, you have made Suzanne a better place for our students!”