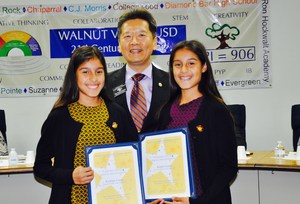 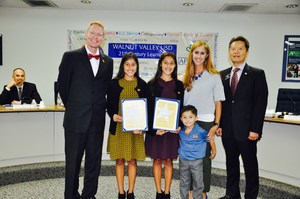 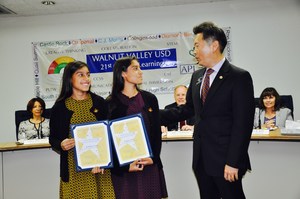 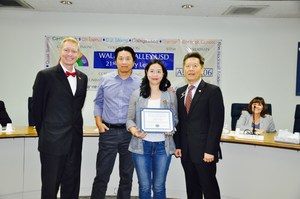 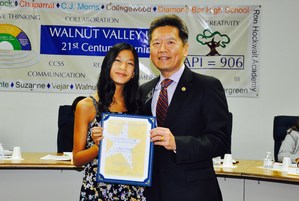 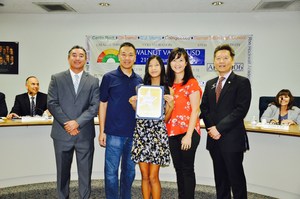 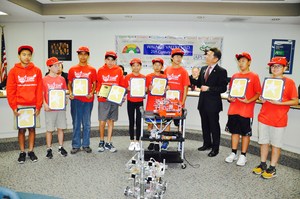 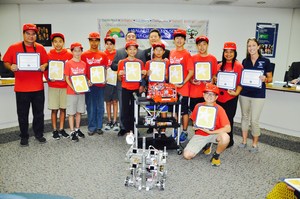 “Tonight, we are pleased to celebrate these two well-rounded students!”

Kaitlyn and Kayla are both 4.0 Honor Roll students; members of ASB, FBLA club, and Breakout EDU; involved in basketball, cross-country, and golf; volunteer as after-school math tutors and technology aides, and play viola in the advanced Sinfonia orchestra.

Parent Cindy Huang was honored with the Partner in Education Award for generously volunteering her time coordinating fundraising events that benefit the school.

She is the current president of the school’s Chinese American Parent Organization (CAPA) and has served as vice president last year.

Cindy and the CAPA members have worked hard to boost membership and have funded numerous projects for teachers. They supply gold cords for the school’s promotion ceremony and have contributed thousands of dollars to band and choir programs.

Additionally, CAPA has been instrumental in translating newsletters and communications to keep members informed.

“This is a wonderful night being able to recognize our students and community members for the support that they provide our school,” said Suzanne principal Les Ojeda.

Chloe is a standout in a class full of leaders that truly embody the leadership class motto: Create Spirit and Serve Our Campus. She recently stepped up to be a team leader for one of the first activities of the year and led her team flawlessly. Even though she was in charge, she worked side-by-side with each member of her team to finish the task.

Chloe even delivered hand-written thank you notes to the team members.

That act of kindness brought “utter joy” to one student, Ojeda recalled.

“Chloe not only served our campus to create a spirit event, but also nurtured the spirit of her team.”

Parent David Morales was honored with the Partner in Education Award.

David has been a wonderful Community Club member and supporter at Suzanne. He puts in endless hours of service and inspires and motivates members to assist staff and students.

He volunteers countless hours in the library, provides student support at registration, and during Accelerated Reader tests administered at lunch and after school. Additionally, he represents the school on the WVUSD Coordinating Council and Technology Committee.

“Suzanne is grateful for the time and effort that he has spent supporting our staff and students. Thank you for making our school a better place!” Ojeda said.

The Wolf Corp. Robotics Team received special recognition during the Board Meeting.

The Wolf Corp. team not only focuses on building and programing robots, they have inspired others during 50 community outreach events.

“As you can see, this group has been representing and promoting both Suzanne and Walnut Valley USD very well in STEM education during tournaments and outreach events,” Ojeda said.