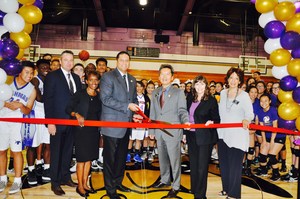 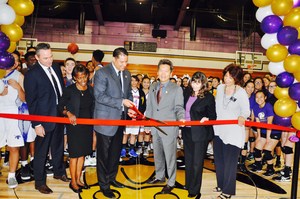 District and school officials, coaches, along with 75 student-athletes attended the special event to commemorate the renovation project.

“This floor that we’re standing on has really been the vision of one person, coach Tony McCabe, who is currently leading the girls golf team at the 2017 CIF State Championships in Roseville,” said Principal Reuben Jones.

“He picked the colors, layout, the logos.”

Members of the girls volleyball team, currently in second round CIF playoffs, girls and boys basketball, six-time CIF State Champion badminton team, and pep squad lined the perimeter of the court during the ceremony.

The student athletes are excited about their modernized home court.

“The sleek floor will allow us to agilely sprint across the court with ease.”

The previous 32-year-old floor was scheduled to be refinished in July, but had to be completely replaced after termite damage was discovered.

Jones thanked district staff, school personnel, and parents for their support during the massive project.

After the official ribbon cutting, the winter sports teams took to the court for demonstrations, followed by impressive basketball, badminton, and volleyball shots with officials.