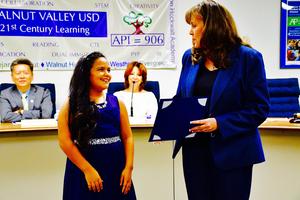 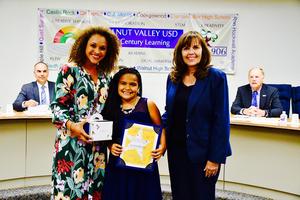 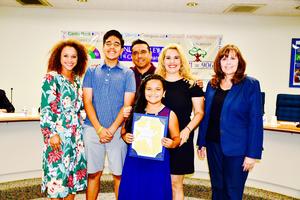 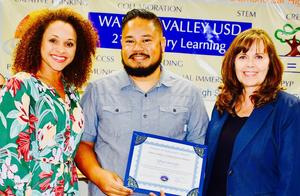 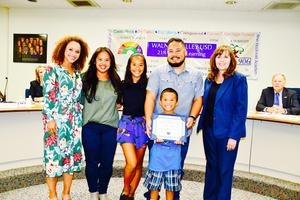 WALNUT, CA—In keeping with tradition, the Walnut Valley USD Board of Trustees paid tribute to a standout student and parent volunteer during the September 19 meeting.

As a Student Ambassador, she serves to reinforce the Vejar Values and models them as a shining example for friends and classmates, said Principal Whitney Prenger.

Scarlett is the author and actress of character education skits at school assembles and is known as the inspiring voice during Project Wisdom morning announcements.

The standout student takes charge of her learning, follows the Golden Rule, possesses integrity, and gives 110-percent in all that she does.

“Scarlett is truly is a star who embraces academic challenges with grit, perseverance, a stylish bow, and a winning smile!” said Prenger.

“Alfred has been one of Vejar’s most prized parent helpers for more than 15 years,” said Prenger.

“Alfred is a valuable member of the Walnut Valley community, a wonderful friend, parent, and partner in education!” Prenger said.