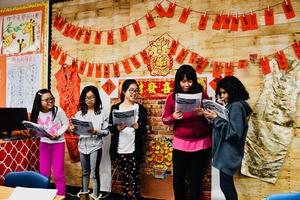 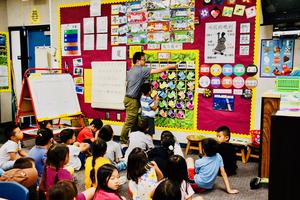 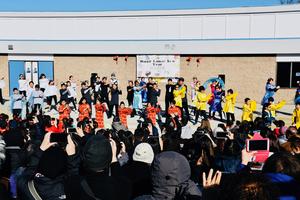 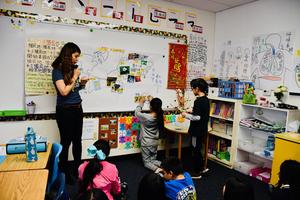 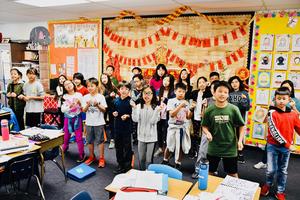 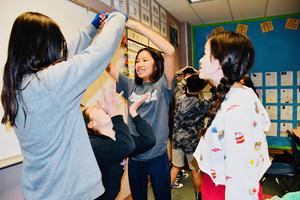 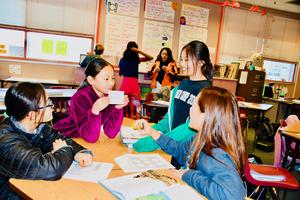 Hundreds of students are reaping the benefits of speaking multiple languages at an early age.

During the past eight years, the program has grown from 46 students to over 300 kindergarten through fifth grade students at Walnut Elementary.

In 2017, DLI expanded to South Pointe Middle School and now serves nearly 80 sixth and seventh grade students, with plans to expand to eighth grade for the 2019-2020 school year.

Students participate in a 50-50 program, where half of the day is spent learning in a Mandarin-speaking environment.

“The children soak up the new language like little sponges,” said first grade teacher Henry Lin who sees tremendous growth of the young learners each year.

“I enjoy DLI because I get to learn a new language – and that’s pretty cool!” commented fifth grader Logan Lee who has been in the program since kindergarten.

Mandarin teacher Isabelle Lin then utilized Project GLAD strategies during a social studies lesson to help students get a better understanding of the Thirteen Colonies.

As they listened to their teacher re-tell a story, the children inserted pictures and vocabulary words in the correct location on a chart.

“It’s a review and also an informal assessment for me to know if they understand the content,” Lin said.

Later that morning, the group rehearsed for the schoolwide Lunar New Year celebration with choreographed songs and skits presented entirely in Mandarin.

Each grade level of DLI classes took the stage to perform for families and schoolmates on February 6 and 7.

During the lesson, one group portrayed a Roman Dome, while another shared about the thousand miles of Roman roads built in 300 BC.

“I believe this DLI program not only exposes students to the Mandarin language, but also enables them to appreciate Chinese and Taiwanese cultures and lifestyles,” commented social studies teacher Jared Wu.

The strong and rigorous model has been developed through the extensive research and collaboration at both schools.

“Our DLI students are performing at or above their grade level standards in all core subject areas – English, math, social studies, and science,” said Walnut Elementary Principal Robert Chang.

“And our program is successful because of our fantastic teachers!”

The ultimate goal for the dual language immersion plan is to help develop bilingualism, biliteracy, and an enhanced awareness of cultural diversity.

“It’s having that deep understanding and respect for the Chinese people and their very rich culture.”